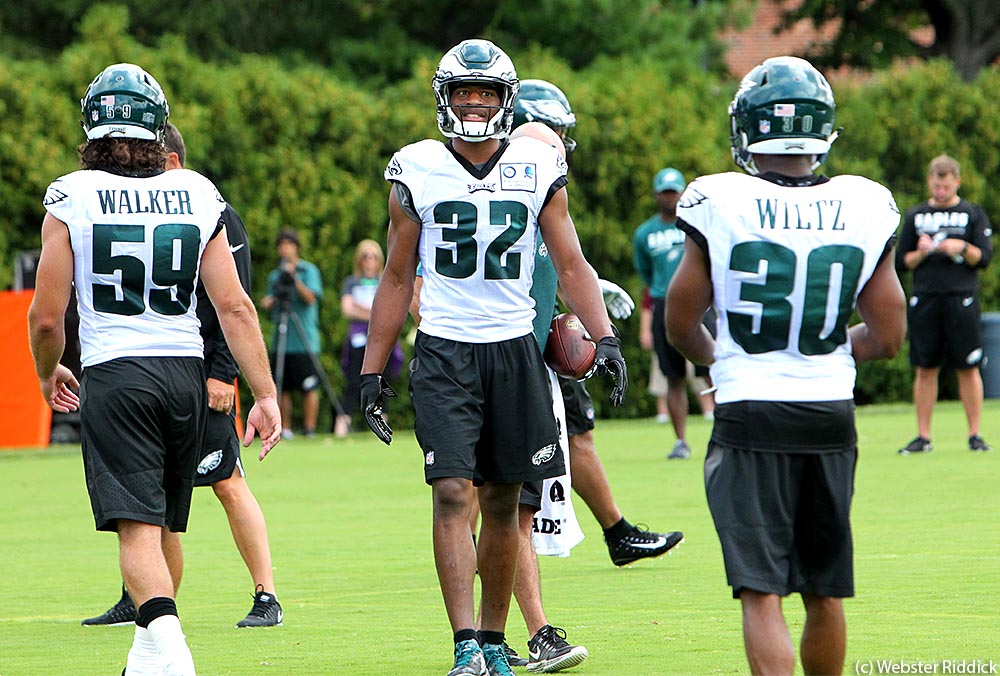 Eagles rookie cornerbacks Rasul Douglas (32) and Jomal Wiltz (30) are competing to get playing time in the Eagles secondary. Photo by Webster Riddick.

With a group of new players and rookies and a ton of expectations, the Philadelphia Eagles 2017 squad started training camp on Monday with more questions than answers.

But fans are hoping that once the team gets these questions answered, the Eagles will be a shoo-in for a playoff spot and possibly a Super Bowl.

Among these questions fans and coaches have is How much better will quarterback Carson Wentz play now that he has more weapons to work with? The Eagles signed wide receivers Alshon Jeffery and Torrey Smith in the off-season, giving Wentz two more weapons to work with. He’ll also have running back LeGarrette Blount behind him, and the team is hoping that he can duplicate his career-high 1,161 yards rushing and 18 touchdowns from last year. Coaches will also be keeping an eye on diminutive rookie running back Donnel Pumphrey to see if he can be an every-down running back despite weighing just 178 pounds.

On the defensive side of the ball, the weakest link on the Eagles squad appears to be the secondary in general and the cornerback slot in particular. That’s because you have a group a group that hasn’t played with each other much that includes a group of talented, but untested rookies and a second-year player still trying to find his way.

“We’re going to continue to look to bring in guys, if we can, to create as much competition at that spot,” said head coach Doug Pederson during his post-practice press conference on Monday. “It’s obviously a spot we’re going to keep our eyes on throughout camp, but it gives a couple of our younger guys a chance to get some valuable reps.”

Rookie and former West Virginia star Rasul Douglas is among the group of Eagles first-year players that could crack the starting lineup or at the very least get some time on the field.  If you know something about his past, this is a young man whose motor is on all of the time.

Before transferring to West Virginia, Douglas played his collegiate ball at Nassau Community College as a walk-on and there were times he had to rely on ordering the McDonald’s dollar menu for meals because he didn’t have a lot of money. That experience fueled his determination to succeed once he got to West Virginia, he said.

Douglas will certainly need that kind of hunger (pardon the pun) to get playing time on the field, much less a starting spot. Especially since the competition appears to be really tough in his chosen slot.

“All of us have a chance to be a starting cornerback every position is open and up for grabs,” said Douglas, who intercepted eight passes in his final season at West Virginia. “We’re all trying to compete and get better every day. We’re definitely working and improving.”

If anything is going to prepare the Eagles young cornerback group for the upcoming season is the group of wide receivers they’ll be going up against in practice. Smith and Jeffrey are veteran receivers who know how to stretch defenses.

During the Eagles mini-camp in June, it was Jeffery who said that he liked Douglas’s potential at the cornerback spot and predicted that the rookie could have as many as five or six interceptions for the Eagles.

If that’s the case, the Birds could make a run for the division title this year.

“(Jeffery) has played against some of the best cornerbacks in the NFL,” Douglas said. “To hear something like that and being a rookie, not knowing and just playing off the athleticism means a lot.”

“I think the competition helps them. Whether it helps them to develop quicker, I don’t know. But I know that competition is going to bring out the best in them,” Schwartz said. “If they make a mistake in technique, it will show. You can’t cover it up against a veteran player. So I think that’s probably the biggest part of that equation.”

But players like Douglas are going to have to learn from players like Brooks and Robinson. Douglas said there were times he struggled during OTAs, but the veteran told him that there are going to those days when receivers get their catches.

“When we first came out here, we were out here just running around, trying to make a play,” he said. “They (the veterans) were like, Look young fella, they (wide receivers) get paid like you get paid. You can’t take away everything.”

The Eagles secondary will certainly need a push from the front seven to get pressure on quarterbacks. On the defensive line, former Baltimore Raven Tim Jurnigan along with defensive end Chris Long will give the Birds a solid rotation.

Meanwhile, rookie and No. I draft pick Derek Barnett is looking to join Brandon Graham as a starting defensive end.

Despite breaking former Eagles great Reggie White’s all-time sack record at the University of Tennessee and being the Eagles No. 1 pick, Barnett knows he’s still got a lot of work ahead of him.

The road to the Philadelphia Eagles 53-man roster for the 2017 season begins with the team’s first pre-season game against the Green Bay Packers on Aug. 10.