Jameis Winston has won a Heisman Trophy and led his team to a national championship, but has been involved in some highly publicized incidents. Photo courtesy of ABCNews.com.

PHILADELPHIA-I’m going to start my column on Florida State quarterback Jameis Winston with a memory from my days as a 20-something student at Morgan State University, so bear with me.

Like a lot of college students, I mixed various extra-curricular activities such as working as a sports anchor at Morgan’s radio station WEAA, maintaining a part-time job, hitting the parties and checking out the ladies along with my classes. In other words, I was your basic college student.

While I had good grades, I also had a bad habit of waiting until the last minute to turn in assignments and get ready for tests.

It caught up to me one day in my Political Science class. I had to make a presentation and after two minutes of fumbling through a poorly prepared speech, my instructor, Professor Grant, decided that he’d had enough. He told me to sit down, chastised my presentation as an “abysmal failure” in front of all my classmates and left me feeling kind of embarrassed for the rest of the class period.

After class, Professor Grant took me and a friend out to lunch. He said that he expected more of me and that being unprepared on the job or in graduate school would lead to my feeling a whole lot worse than it did that day.

To his credit, Professor Grant allowed me to re-do the presentation. But even if he hadn’t, I couldn’t get mad at him because he was right. When he took me to the woodshed in public, it was something that my hard-headed self needed to have happen. It also lit a fire under me and made me remember to stay on top of things in all aspects of my life.

Now I admit that I didn’t have as much going for me as Winston, who has a Heisman Trophy and a national championship under his belt and led the No. 2 ranked Seminoles to a comeback win over Notre Dame last Saturday.

But I’ve been 20. I’ve been hardheaded. I’ve come real close to blowing it. And I’m hoping that Winston’s Professor Grant is on the way because if he doesn’t, things could get ugly.

While Winston has spent a lot of time on the sports pages, which is good, he’s also spent some time in the news section, which isn’t. Between an accusation of sexual assault for which he was never charged, shoplifting $32.00 worth of crab legs, yelling out obscenities in the Student Union, and an accusation of signing and selling autographs–a big no-no for the NCAA–Winston is getting a lot of the kind of attention that a skittish National Football League already reeling from the domestic violence and child abuse incidents of Adrian Peterson and Ray Rice doesn’t want.

In fact, it’s attention that’s already impacting his draft status. NFL Draft pundits say Winston’s draft stock is falling because while his talent is first-round, his character is third or possibly fourth. When you play quarterback in the NFL you are the face of the franchise and the owners don’t like risking millions of dollars if you have a tendency to get in trouble.

Former Heisman Trophy winner Bo Jackson, who like Winston is from Bessemer, Alabama, tried to talk to him in the same emphatic way a parent would before the crab leg incident and didn’t mince words with the young man.

“I really don’t know who is giving this young man guidance. I have communicated with him and I just talked to him like I was his dad. The things that you need to do.,” Jackson said in SBNation. “Normally, I don’t like giving people advice if I haven’t been down that road myself. But if I give you advice on something that I know more about than you by just falling out of bed in the morning, if you can’t take that advice and learn from it, then I’ve got nothing else to do with the situation. You’re on your own.”

Jackson received some shade from Florida State head coach Jimbo Fisher and more than a few people on Facebook and Twitter because they felt Jackson was butting in unnecessarily or he was being too exacting on the kid.

But I’m not mad at Jackson for trying to be Winston’s Professor Grant. The purpose of ruffling Winston’s 20-something feathers a little bit to make him a better person and a better man. We need more “old heads” like Jackson to get into the face of kids like Winston to let them know that they still have a lot to learn about life.

Winston is on that athletic conveyer belt that New York Times sports columnist William C. Rhoden refers to in his book, “Forty-Million Dollar Slaves,” where sometimes the indiscretions and shortcomings of ball players are overlooked because of their athletic prowess.

That often times leads to trouble that athlete can’t always get themselves out of because no one dared to say, “No” or You can’t do this or that. We were all foolish 20-somethings once on some level and there was an older person—an uncle, aunt, cousin, or some other mentor to light a fire under our rear ends to make us better people.

I have seen far too many talented young people, especially young African-American males, with the world in front of them make too many bad decisions that ended up costing them their careers and even their lives.

I covered the story of the death of University of Maryland basketball star Len Bias, who had no history of getting into trouble, but made one bad decision, using cocaine, that cost him his life.

It was one of the toughest stories I’ve had to cover in my journalistic career because it didn’t have to happen.

While many scoff at the whole idea of a “village” being needed to raise a child, I believe it’s true. I don’t know Winston personally, but I get the impression that at his core he’s a good kid in need of some guidance. His problem is one of maturity more than anything else.

I just hope that he finds someone who is strong enough to tell him the truth and help him grow as a man.

I hope he finds his Professor Grant.

Pictures of a worn out floor inside Grambling’s athletic facility. Photo was taken by the Gramblinite and was posted on Twitter.

The school’s football team decided to boycott their scheduled game with Jackson State University to protest the horrid conditions under which they were expected to play and practice.

Among those conditions were mold and mildew in the weight and the locker rooms, uniforms cleaned so poorly that some players had to fight staph infections, and having to take long trips to places like Indiana and Missouri by bus while administrators got plane tickets for themselves.

The players were also upset about the firing of head coach, and Grambling University icon, Doug Williams, who raised funds to renovate the athletic facilities that the university, inexplicably, turned down. The team returned to practice because Williams, who talked to a local businessman who has pledged assistance to the football team, asked them to do it.

But that wasn’t the only thing I kept my eye on. As a journalist, I kept my eye on how this was being covered in the school’s media. Two editors from the school’s newspaper The Gramblinite, Kimberly Monroe and David Lankster Sr. were sanctioned by the university for posting photos illustrating the poor conditions that the football team was protesting on Twitter and for being perceived as taking part in the protests. The Gramblinite was also criticized for using anonymous sources to report the story. 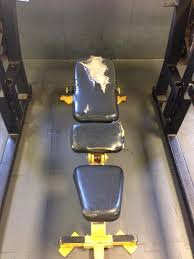 Worn out equipment was among the complaints of Grambling’s football team. Photo by the Gramblinite.

(That last critique was leveled by a former president of the National Association of Black Journalists, but I’ll get into that later. )

If you looked up the phrase “glaring lack of leadership” in the dictionary and didn’t see the situation at Grambling as part of the definition, I’d have to ask you to get another one. Between the infighting, and the bad behavior on the part of the adults who are charged with looking out for the welfare of the football team and The Gramblinite staff, this was a red-hot mess.

Let’s start with the athletic facilities themselves. Because of cuts to the athletic program, Williams reached out to fellow Grambling athletes including James “Shack” Harris to ask for money to make the necessary repairs to the weight room floor. But because he didn’t go through what the University perceived as the “proper channels”, the university didn’t take the money.

Now Grambling President Frank Pogue and Athletic Director Aaron James, the folks that were taking the plane to those far away games while the actual players had to go to on the bus, decided that instead of working with Williams and his alumni partners to find a solution, they’d fire Williams instead.

Without explaining it to the players.

Something that made this group of students, a group that was already kind of close to its boiling point with Grambling administration because 1,700-mile bus rides will make anyone cranky, even more so.

So they refused to get on the bus to go to Jackson State last Friday. And gave ESPN’s Pedro Gomez a letter explaining why. The University finally listened…but not until everyone from Bill Rhoden of The New York Times to Roland Martin of TVOne began seating Grambling students in their interview chairs.

Meanwhile, the students at The Gramblinite did what any school’s student-run newspaper should do when in the center of a story like this…they reported the story.

Like any media outlet these days, The Gramblinite used social media platforms like Twitter and Instagram to tell the story in real time. The paper posted photos of the conditions on Twitter to confirm what they got from the anonymous sources that spoke to them…which is what you’re supposed to do.

But Grambling’s Director of Communications Will Sutton chastised the students publicly for something that he wouldn’t have raised an eyebrow about during his days as a reporter. Sutton, a past president of NABJ who worked for the Philadelphia Inquirer and the News and Observer in Raleigh, N.C. before coming to Grambling, used Twitter to reprimand the students for posting the photos and using unnamed sources.

“@thegramblinite Are you serious? “Unidentified”? Really? Step up and be identified and stop hiding, or don’t use them as sources.”

Now most people who put themselves out there as anonymous sources do so because being public could lead to repercussions. Isn’t the reason you protect unnamed sources to make sure there is no retaliation, i.e. a person gets fired or gets kicked out of school?

The fact that the student journalists were called on the carpet was more about not wanting Grambling’s dirty laundry on the front lawn than it was about the violation of university rules.

And besides, it’s illegal, said Frank LoMonte, the executive director of the Student Press Law Center.

“Public university employees can’t use their governmental authority to punish journalists for their editorial content, period,” LoMonte told the Maynard Center for Journalism Education in an interview.

While Grambling officials can point to drastic budget cuts by Louisiana’s Republican Gov. Bobby Jindal as a factor because they’ve forced the school to do more with less and a lack of alumni giving for the problems with the football team, the bottom line is that this walkout happened due to a lack of respect, not a lack of financing.

The adults in any situation are supposed to know better.

Too bad that in this case, very few did.