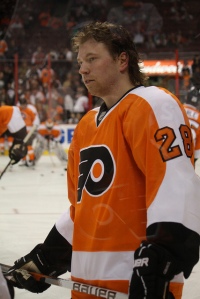 Claude Giroux scored the only Flyers in the loss to the Ottawa Senators.

For the Chris Murray Report and the Philadelphia Sunday

With season dwindling down to just eight games left in the season, the Flyers playoff chances on are on life support and are about to fade to black.

The Flyers are seven points behind the New York Rangers for the final playoff spot in the NHL with three teams ahead of them. From this point forward they have no margin for error.

“I think everyone’s still going to put in a good effort right up to the end. There’s no question about that,” said Flyers defenseman Luke Schenn. “Guys still have a lot to play for, but obviously everybody’s a little bit frustrated.

“I think guys are probably squeezing the stick too tight. Obviously, we’re not scoring very many goals. I know everyone’s working and competing and we’re going to do it to the very end.”

It was another night the Flyers couldn’t get anything going offensively and the Ottawa Senators came away with a 3-1 victory at the Wells Fargo Center Thursday night.

“All losses are tough,” said Flyers coach Peter Laviolette. “We’re in the business of winning hockey games. Not getting that done is frustrating at this point.”

Ottawa got what turned out to be the winning score on a power-play goal by left winger Colin Greening. The Flyers were a man down because of a high-sticking double minor on Claude Giroux whose stick ended up on the face of Ottawa’s Mika Zibanejad.

The Senators added an empty by Daniel Alfredsson in the last 10 seconds of the game.

Not only was it the Flyers third straight loss, it was also the third consecutive game in which they could muster no more than one goal.  In a season that has been hot and cold, it was another frustrating night of not being able to put the puck in the net.

“We got to find a way of getting more pucks to the net, more traffic and we have to be a little bit more  hungry than we are right now,” said Flyers center Claude Giroux. “We’re not getting the job done right now and so we have to figure out something there.”

For a team that was fighting for whatever faint playoff hopes it supposedly has, the Flyers didn’t come out with a sense of urgency in the first period.

Ottawa jumped on the board with a breakaway by center Zack Smith, who took a pass from Mark Methot and slid the puck past goal Ilya Brzygalov. Smith was able to have a clear shot at Brzygalov because the Flyers were in the middle of a line change and simply caught got napping.

With the exception of the two goals, Brzygalov did a good job of guarding the net for the Flyers. He had 31 saves.

But later in the period, the Flyers evened the game at 1-1 with 7:44 left on a short-handed  goal by Claude Giroux who deflected a shot by Simon Gagne past goalie Robin Lehner.

Through the first two periods, the Senators outshot the Flyers 24-14. In the second period, the Flyers had just seven shots on goal. The Flyers picked up the pace in the third period and had 13 shots on goal but couldn’t get anything past Lehner.

“I thought the third period was our best period,” Laviolette said. “It generated the most offense, probably played the tightest defensively that we played that period, but we didn’t get the results we were looking for.”