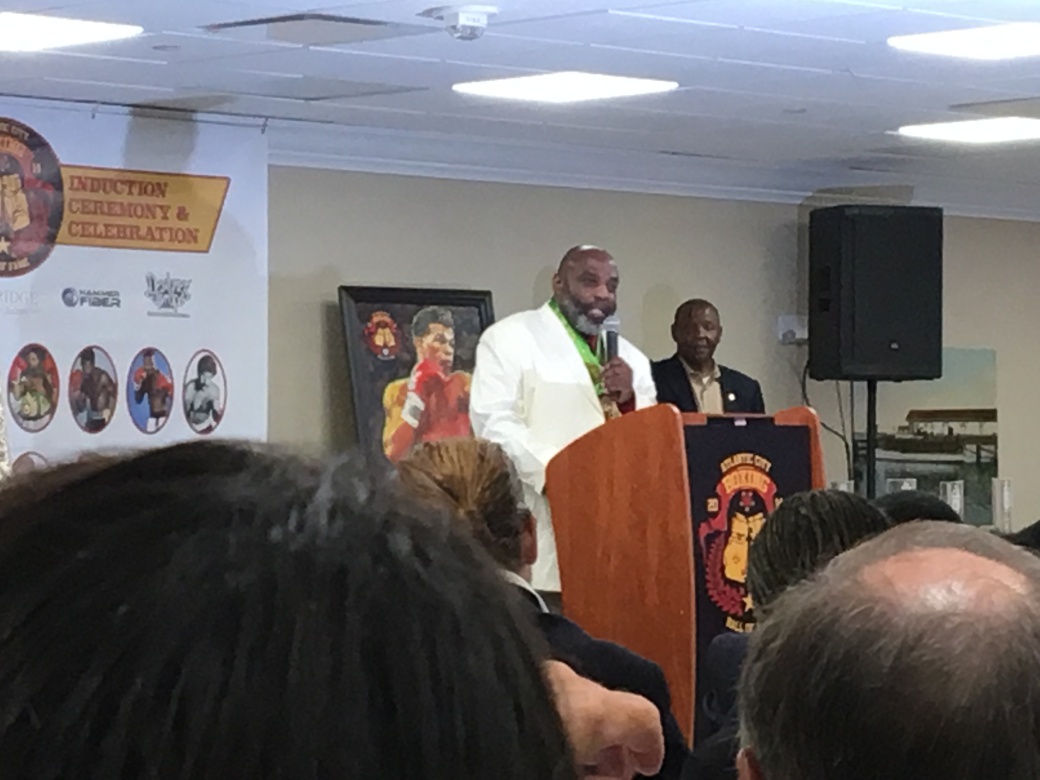 Dwight Muhammad Qawi was inducted into the new Atlantic City Boxing Hall of Fame. Known as the “Camden Buzz Saw,” Muhammad had some memorable fights in Atlantic City. Photo by Chris Murray

Back in the 1980s, local high rollers looking for entertainment away from the tables in the form of a boxing match didn’t have to go all the way to Las Vegas to scratch that itch.

They only had to go as far as Atlantic City.

Atlantic City was as big a boxing venue as they come and was the setting for some of the greatest boxing matches in the sport’s history.

From the heavyweight title bout between Mike Tyson and Michael Spinks, to the Arturo Gatti-Mickey Ward Trilogy, and great matchups between Philly-area fighters like Dwight Muhammad Qawi and Matthew Saad-Muhammad, Atlantic City was a major hub for professional boxing.

That history was honored on Sunday night (May 28) as the Atlantic City Boxing Hall of Fame inducted its first class of boxing legends.

In addition to being a celebration of the Sweet Science, the ceremony at the Claridge Hotel also served as a glowing tribute to what was once one of the sport’s beloved locations.

Like the boxers it celebrated, Atlantic City itself is scrappy. Through the ACBHOF, that scrappiness is celebrated, said Ray McCline, the Hall of Fame’s president and founder.

At a time when the city’s Boardwalk is a shadow of its former self and tourism is spotty, the ACBHOF could be a big help, McCline said.

“It’s a huge boost,” he said.  “It’s really about trying to remind people what Atlantic City was in the past, but to also create a space so that we can be competitive on a boxing level … It’s about promoting the history of Atlantic City and also Atlantic City as a tourist destination for people that love the sport, but also love the city.

Don Guardian, Atlantic City’s Mayor, agrees. The economic impact these athletes had on the City alone makes honoring them this way make sense, he said.

“It’s almost like we owe this to these great athletes that came in their prime and performed in Boardwalk Hall, especially,” he said. “What it meant was that hundreds of thousands of people over a decade came to Atlantic City that wouldn’t have been here otherwise.  … Thousands of jobs existed because of the great athletes that are in that ring.  Atlantic City was the East Coast boxing Mecca and it we hope to return to that again.”

While McCline and Guardian are optimistic that Atlantic City can return to its boxing glory days, Peltz thinks that the increased level of competition from casinos in locations like upstate New York and Connecticut makes it highly unlikely.

“I think Spinks and Tyson was the peak in June of 1988,” he said. “It’s never going to be what it was because the casinos have too much competition from those in New York and Connecticut and they aren’t willing to put up the money they way they used to back in those days.”

For boxing fans, Sunday night’s event provided a chance to envision what Atlantic City’s boxing heyday must have looked like. Seeing Michael Spinks and Dwight Muhammad Qawi and Mike Rossman served as a reminder of the epic battles these fighters had with each other and of the days when Atlantic City was a great boxing venue.

“I don’t try to figure it out, I just accept it,” said Qawi, who fought Matthew Saad Muhammad, both Michael and Leon Spinks. “(Fighting in Atlantic City) brought the best out of me.”

McCline is in the process of trying to find a permanent home for the ACBHOF, he said. The Claridge Hotel is in the running, and he is looking at other locations around the city.

Here are the members of the Atlantic City Boxing Hall of Fame’s Class of 2017: