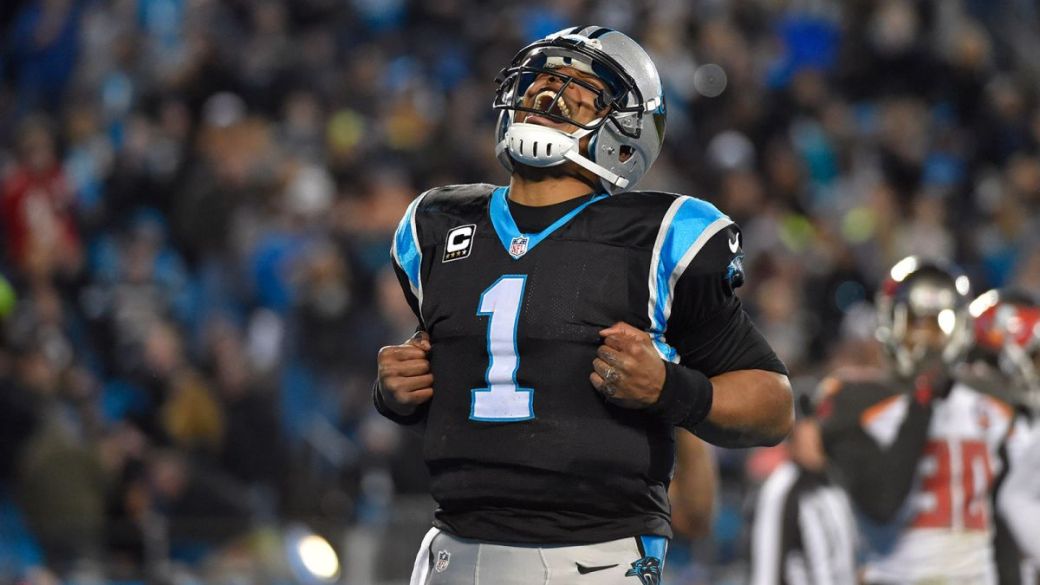 Cam Newton flexing his Superman pose after scoring a touchdown against Tampa Bay. Newton led the Panthers to Super Bowl 50.

Carolina Panthers quarterback Cam Newton will be coming into Super Bowl 50 with a myriad of accolades thanks to the NFL and a target placed on his back by the Denver Broncos defense.

Newton was voted the NFL’s Most Valuable Player by the Associated Press and the Pro Football Writer’s of America. He’ll be taking on future Hall of Famer Peyton Manning when the Super Bowl is played on Feb. 7 at Levis Stadium in Santa Clara, California.

When you look at his stats this season, it reminds me of something one would see in a John Madden football video game. Newton passed for 3,837 yards and threw 35 touchdown passes. He also ran for 636 yards and scored 10 rushing touchdowns.

In total, Newton accounted for 4,473 yards and 45 touchdowns. At 6-5, 245 pounds, Newton is bigger than some linebackers and defensive ends and is a punishing runner.

During the 2015 season, Newton made himself into one of the league’s elite players and arguably elite quarterbacks. He was voted the NFL’s Offensive Player of the Year.

But what makes all of the praise he’s getting now so ironic is that many of the people lauding him were pouring haterade by the gallon on Newton in the days leading up to his being taken as the first overall pick in the 2011 NFL Draft. Coming out of college, draft experts and NFL pundits alike trashed Newton by throwing out every racist stereotype of Black quarterbacks that had ever existed.

Never mind that he had won a national championship at Auburn, a junior college championship the previous year and was the 2010 Heisman Trophy winner, all the so-called experts questioned his intelligence and his leadership.

Most of the criticism centered on a perceived inability to read NFL defenses and how that inability would all but ensure he wouldn’t make it in the NFL. These “experts” also said he was arrogant because he told Sports Illustrated’s Peter King that he planned on being an icon and an entertainer.

ESPN’s Skip Bayless said Newton didn’t have accuracy of a Tim Tebow, who is now a college football analyst on the Worldwide Leader In Sports.

One columnist of a popular sports website said Newton was going to be a bust along the lines of quarterbacks Ryan Leaf, Matt Leinart and Vince Young.

Of course, Newton did get kicked off the football team at Florida for stealing a laptop, a crime in which all of the charges were dropped due to a pre-trial intervention program in Florida. There were also reports of academic misconduct as well.

And then there’s the charge that Newton father, Cecil, was trying to peddle his son’s services to Mississippi State for $180,000. That allegation was never proven and Auburn was not sanctioned by the NCAA because of it.

Meanwhile, as the investigation into those alleged NCAA violations was reported on all the major sports networks, Newton never wavered in his focus in leading the Tigers to a national championship. One of those games include Newton leading Auburn back from a 24-0 deficit on the road against a Nick Saban-coached University of Alabama squad that was coming off a national championship the year before.

And yet, Newton’s critics said that the recent Auburn University graduate didn’t have the IQ or leadership ability to be an NFL quarterback, which was completely absurd because you don’t win a national championship without being a team leader and having the mental toughness to stay focused in the face of all of the hoopla around the possibility of NCAA sanctions.

But despite struggling to adjust to the pro game, something all young quarterbacks do, and despite doing some sulking on the sidelines his second year in the league, something that you’d also expect from a 23-year-old and that veterans such as Steve Smith Sr. quickly got him out of, Newton has led the Panthers to three straight playoff appearances including this year’s Super Bowl run.

This year, Newton showed that he could make other around him better, something he did at Auburn. When Carolina’s best receiver Kelvin Benjamin went down with a season-ending injury, Newton utilized his tight end, Greg Olsen as a deep receiver and he’s made Devin Funchess, Ted Ginn Jr. and Jerricho Cotchery into better receivers.

Whether Newton leads Carolina to a Super Bowl victory or not on Feb. 7 , he can say to his Draft Day critics that old Kool Moe Dee lyric, “How ya like me now?”