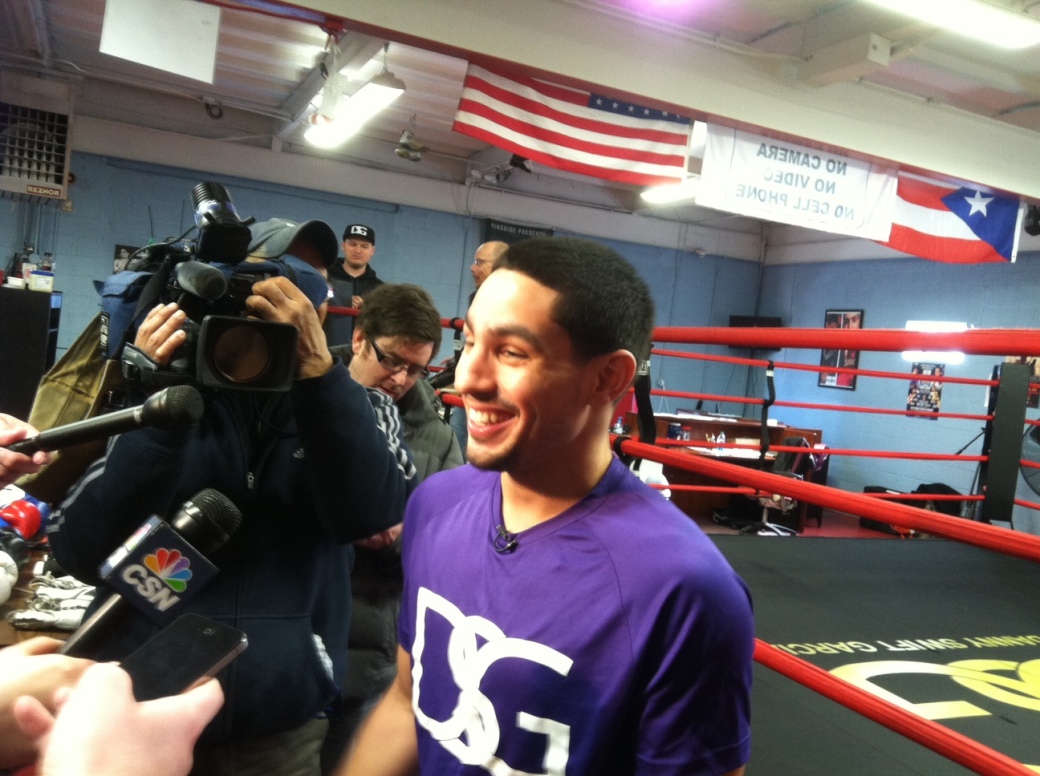 Danny “Swift” Garcia has always been confident enough to take advantage of his opportunities as a boxer when the spotlight’s on him.

This Saturday night, the undefeated welterweight, (31-0, 18 KOs) has the chance to add another championship belt to his mantle when he takes Robert “The Ghost” Guerrero for the vacant World Boxing Council welterweight at the Staples Center in Los Angeles.

The fight will be nationally televised on FOX and FOX Deportes as a part of its Premier Boxing Champions on Fox Live series.

When it’s all said and done, Garcia said, It’s going to be all about him.

Fighting in his second fight at the welterweight level, Garcia said he is less angry and moody than he was when he was fighting at the 140-pound junior welterweight level. In his first fight as a 147-lb welterweight, he dominated former two-time world champion Paulie Malignaggi, stopping him in a ninth-round technical knockout last August.

“ I’m able to think more; I’m able to be a lot smarter,” Garcia said. “My punches are crispier and my stamina is better. I’m able to run more, run more miles, train harder; more endurance. So I may have had the energy at 140, but at 147 I just feel a lot stronger and I have more stamina.”

In his first title fight at the 140-pound level against Lucas Matthyss, Garcia came into the fight a decided underdog. But the North Philly fighter proved all the experts wrong and came away with an impressive unanimous decision that included an 11th round knockdown of Matthyss.

This time around against Guerrero (33-3-1, 18 KOs), who has lost two of his last four fights including a decision against Floyd Mayweather Jr., Garcia is heavily favored to beat his opponent. Garcia said he has not changed his approach in how he gets ready for a match.

“I always approach my fight mentally [thinking] that I’m going to win,” Garcia said. “I never feed into the politics of the sport or who people think is going to win or going to lose. I prepare myself to be the best Danny Garcia at every fight, and that’s what I prepared myself to do for this fight.”

Garcia believes he has the ability to put away Guerrero early and predicted the fight would be over in his favor within five rounds.

“I’ve just got to go in there and get the job done like I always do. I’m not really worried about what’s next on the agenda or anything like that,” Garcia said. “Our main focus is to get the job done and that’s what we’re preparing ourselves for.”

Meanwhile, the 32-year-old Guerrero, a two-time world title holder, is looking for a chance for redemption and to boost a career that appears to be on the decline. In his last win over Aaron Martinez, Guerrero got knocked down in the fourth round and wound up getting a split decision.

“I think this is a tremendous fight for me to get back on top and to get back in the ranks,” Guerrero said. “To show the doubters and the media and everybody out there that Guerrero got a lot left in him. I’ve been 100 percent prepared for this fight.”