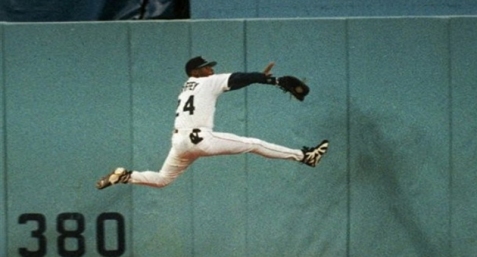 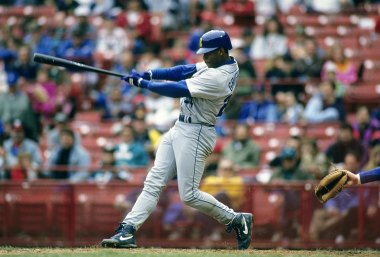 CIRCA 1990’s: Outfielder Ken Griffey Jr. #24 of the Seattle Mariners swings and watches the flight of his ball during a early circa 1990’s Major League Baseball game. Griffey played for the Mariners from 1989-99. (Photo by Focus on Sport/Getty Images) 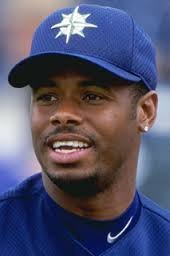 If a sportswriter or columnist like myself said that he or she didn’t have athletes they really liked to talk to or really disliked talking to throughout their careers, they’d be lying to you.

While as a journalist you’re not supposed to let your personal admiration or dislike for an athlete cloud how you cover their accomplishments on the field, we are human. We just have to work harder in those cases.

But sometimes, there’s an athlete so universally respected that you find yourself pulling for them…and you don’t care who knows it.

Ken Griffey Jr., one of the newest members of Major League Baseball’s Hall of Fame is one of those guys. The former Seattle Mariners/Cincinnati Reds centerfielder was just three votes shy of being an unanimous selection for the Hall of Fame by the Baseball Writers of America, breaking New York Mets pitcher Tom Seaver’s record. Los Angeles Dodgers/New York Mets catcher Mike Piazza will be joining him in the Hall’s Class of 2016.

Not only did Griffey deserve that honor, he is living proof that you can be a great player without being a self-centered jerk. As a player, Griffey was one of the game’s best center fielders and played with the outfield with the ferocity of a Frank Robinson, Roberto Clemente and a Pete Rose.

And I’m not ashamed to say that I genuinely liked him.

For a “nice guy”, Griffey put up some fierce numbers on the field. In a 22-year career, he hit 630 career home runs, ranking sixth on the all-time list. He ranks 15th all-time in runs batted in with 1,836 and had a .284 lifetime batting average. Defensively, Griffey was a 10-time Gold Glove winner who could run down any ball hit in the outfield even if it meant crashing into an outfield wall which he did on numerous occasions.

Unfortunately, it was those injuries from crashing into outfield walls that probably kept Griffey from threatening the all-time home-run record the way that Barry Bonds did.

From 1993 to 2000, Griffey averaged 43 home runs per year. But from 2001 to 2007, he spent a considerable amount on the disabled list with injuries. Had he been healthy and was hitting home runs at the same pace he did from 1993-2000, he would have easily surpassed both Barry Bonds and Hank Aaron. ‘

Had Griffey been the one to surpass Aaron, I believe that we’d have a completely different view of the home run record. A combination of Griffey’s “nice guy” persona and the absence of the cloud of steroid suspicion that still follows Bonds would have made his pursuit of the Home Run record a cause for celebration instead of consternation.

Back in 2008, when he was playing with the Cincinnati Reds, I caught up with Griffey at Citizens Bank Park and spoke to him about his career shortly before he reached the 600-home run milestone. He was nice enough to give me about 10 or 15 minutes of his time for a one-on-one after a game in the Reds clubhouse, something that rarely happens.

I asked him about his thoughts about hitting 600 home runs and he seemed almost embarrassed to talk about it. He was at peace with himself about his career and had no regrets about his injuries keeping him from being a part of the all-time home run race.

“Everything I did, I did for the good of the team,” Griffey said. “I went out there and played as hard as I could and that’s the most important thing. I can go in there and look at myself in the mirror and go, ‘you got hurt, but that’s part of the game.’

“If I did it jump roping, then you can say something. Everything I did, I did in front of people doing the thing that I love.”

I still can hear the standing ovation he received when he came out to pinch hit during that series at Citizens Bank Park. It’s rare that a player not wearing a Phillies uniform gets that kind of love from Philly sports fans.

At the time, Griffey said he wanted to be remembered for his defense and giving his best every time he stepped on the field. which is why he will have a statue in Cooperstown.

“That’s the one thing I try to teach my kids, don’t be a what-if,” Griffey said. “I can care less if you win or lose at that age; as long as you give me the effort. I know you’re going to give me that effort whether it’s on the field or off the field.”

At a time where ball playing knuckleheads and their antics rule the headlines, it’s a good to see a nice guy like Ken Griffey Jr. get his accolades.