Serena Williams is halfway to tennis’s Grand Slam. She renews her chase for immortality at Wimbledon.

PHILADELPHIA—This year’s Wimbledon Championships will spotlight the both the 40th anniversary of a significant milestone in the tournament’s history and a player’s attempt to achieve a rare feat in the history of tennis.
In 1975, Arthur Ashe became the first African-American male tennis player to win a professional singles title when he came away with a four-set victory over Jimmy Connors, at that time the world’s No. 1 player. It was a crowning achievement for Ashe, who went on to become as recognized for his leadership in the movement to end apartheid in South Africa, and his advocacy for more research dollars for HIV/AIDS research. 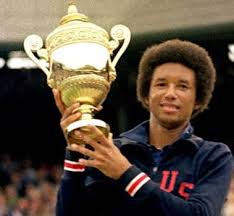 Now, 40 years after Ashe’s triumphant, color-line breaking win at Wimbledon, another African-American tennis player, Serena Williams, is looking to accomplish a rare feat that would make her one of the greatest female tennis players of all-time without question.
Williams is trying to become first tennis player since Steffi Graff to win the game’s Grand Slam– the Australian Open, the French Open, Wimbledon and the U.S. Open—in a single season. So far, she’s won the Australian and the French. Because she ended 2014 with a win at the U.S. Open, a win at Wimbledon would give Williams a calendar year Grand-Slam.

But while winning a calendar year Grand Slam may take doing, winning a single season Grand Slam is a lot easier said than done, even for someone with Williams’s talent. To give some perspective on how difficult a task she faces, you need only look at the numbers.

Since the start of the Open Era in 1968, only three people have ever won it. Australian Rod Laver, who won all four events in 1969, is the last male tennis player to accomplish the feat. Considering that a whole raft of tennis greats such as Connors, Bjorn Borg, John McEnroe, Ivan Lendl, Boris Becker, Pete Sampras and Roger Federer have all stints where they were the most dominant players in the sport, and yet none of them was able to do it, that’s significant.

On the women’s side, Margaret Court was the first to do it in 1970. It took another 18 years before Steffi Graf won the Grand Slam and no one else has done it since. Jennifer Capriati came close, winning the Australian and French Opens in 2001, but by winning Wimbledon that year, Venus Williams stopped her from accomplishing the milestone.

Right now, no one in the world is playing better than Serena Williams and that’s why some tennis experts believe that the Grand Slam is within her grasp. In an article on Wimbledon.com, former women’s tennis star and ESPN tennis analyst Chris Evert said she likes Williams’ chances to pull it off.

“When she is at her best she is better than anybody,” Evert said. “She’s got a great shot. To me her game is better suited to the grass courts than it is to the clay… But her game, just because of her serve, she’s going to get free aces. … It should be one of the easier Grand Slams for her.”

Williams would probably tell you herself that it’s not going to be easy at all. Even though she came away victorious in Paris, Williams had a tough time at Roland Garros, battling the flu and opponents Timea Bacsinszky and Lucie Safarova.

Still, despite looking like she was ready to pass out, using cold compresses during the changeovers, and guzzling water to stay hydrated, Williams managed to win the French Open and serve notice that she’s better than much of the women’s draw even when she’s sick.

With the win at the French, Williams has won 20 major singles, two away from Steffi Graff (22) and four away from Margaret Court who has 24. She has won 21 straight matches and is on the verge of making history as the fortnight at Wimbledon begins.
Like Arthur Ashe, Serena Williams learned how to play tennis on public courts in the inner city.

When he won the All-England title 40 years ago, Ashe made history.

Williams manages to get one step closer to winning the Grand Slam by winning the Wimbledon title, she stands a chance of making history as well.

And somewhere, Arthur Ashe will be smiling.

3 thoughts on “Forty Years After Arthur Ashe’s Milestone Win at Wimbledon, Serena Williams Looks to Add to Her Legacy”