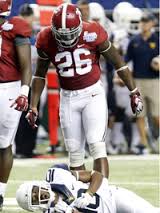 Several mock drafts throughout the league are project former Alabama star Landon Collins to be available for the Eagles, who have the 20th pick in the April 30 NFL Draft in Chicago. Photo by Alabama.Rivals. Com 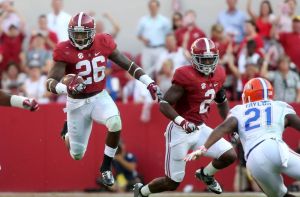 Barring a bizarre Draft Day move that allows the Philadelphia Eagles to miraculously land 2014 Heisman Trophy winner Marcus Mariota or pick up Cleveland Browns quarterback Johnny Manziel in a trade, look for the Birds to fill their needs in the defensive secondary with their first pick in the 2015 NFL Draft.

If Chip Kelly decides not to go that route with the first pick, he’s either totally forgotten how his secondary melted down in a horrendous three-game losing streak that bounced the Eagles out of playoff contention near the end of last season, or he’s a fool.

Last season, the Eagles were 31st in passing yardage allowed and were tied for 28th in the league for touchdown passes allowed with 30. If they’re going to get back to the playoffs, those numbers have to improve dramatically.

During the free agency period, the Birds made a key upgrade to the secondary when they landed former Seattle Seahawks cornerback Byron Maxwell. But the Eagles still need a good safety, a position that hasn’t been relevant since the days of Brian Dawkins.

Most of the Mock Drafts have the Eagles taking former Alabama safety Landon Collins (6-feet-0, 225 pounds) with the 20th pick in the first round and from what I’ve seen on film and during the college football season, he will definitely be an improvement.

Collins is a guy who isn’t afraid of hitting people and can act as an enforcer, something the Eagles haven’t had since Dawkins made his way to the Denver Broncos. According to the various online scouting reports, Collins is an aggressive, explosive hitter who can attack teams in the running game. Last season, he led the Crimson Tide with 103 tackles.

In 41 career games, Collins has shown that he can play both safety spots and will probably line up at strong safety for the Eagles. The draft experts are all saying Collins can use his physicality to disrupt opposing receivers. Collins is a big hitter and can play deep in the middle of a defense in pass coverage as well being the eighth man in the box to stop the run.

Collins is also physical enough to matchup against tight ends and if the Eagles draft him, he will see plenty of Dallas Cowboys tight end Jason Witten.

Of course, like every player coming out of college, Collins does have his share of weaknesses that will have to be worked on as he transitions into the pro game. The word on Collins is that he has average hands, which is why I guess he’s playing on the defensive side of the football. He dropped a pair of easy interceptions in games against Texas A&M and Arkansas last season.

He’s also not the fastest guy, according to NFL.com. According to scouting reports on Collins, he has a propensity to be beaten in a footrace and tends to rely on his recovery speed a bit too much, something you can’t do against guys like Bryant, Julio Jones of the Atlanta Falcons or Calvin Johnson of the Detroit Lions. Collins also has a tendency to get caught looking in the backfield when quarterbacks call play-action passes. That’s something he’s going to have to learn when he starts playing in the NFL.

At the end of the day, the Eagles would get a guy who doesn’t mind laying the wood on opposing receivers and opposing running backs if they decide to draft Collins. The scouts say he’s the type of player who likes to initiate the action rather than lay back in coverage. His versatility is also a plus.

For a team that hasn’t had a safety that puts the fear of God into wide receivers since 2008, Collins would be a breath of fresh air for an Eagles secondary that could certainly use some.