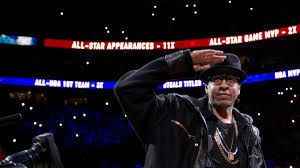 Allen Iverson on his retirement day. After a brilliant and sometimes tumultuous career, Iverson thinks he can help in the front office.

PHILAELPHIA— In addition to a devastating crossover and a game that you’d expect to see from guys twice his size, former 76ers guard Allen Iverson was known for not being real fond of practice.

But according to an article on nbc sports.com, Iverson would like to help the Sixers find some guys who might have a better attitude toward it.

Iverson has expressed a desire to be a part of the Sixers brain trust. That’s right, the guy who often clashed with head coach Larry Brown and was the subject of an angry tirade from former Sixers general manager Billy King when he and Chris Webber failed to show up for Fan Appreciation Day back in 2006, wants a gig in the front office.

Because skepticism and Allen Iverson go together like chocolate and peanut butter for some people, many believe that his bad off-the court habits and the perception that being a great player doesn’t mean you can spot talent, will keep him out of the Sixers war room.

The skeptics have a point. For every John Elway who has successfully transitioned from the field to both coaching and the front office, there are guys like Ted Williams and Elgin Baylors of the world who were absolute disasters.

During a 76ers broadcast, the irrepressible Iverson made his case for why he would be an ideal candidate for a front office post when he was asked what he looked for in a player:

“Their fight. Their fight. The fight in a guy. I’m the biggest [Russell] Westbrook fan I think there is. You know what I mean? Because he reminds me so much of myself as far as his heart and laying it on the line night in and night out. This is a guy who’s going to bring it every single night.”

That statement coming from Iverson has a lot of credibility because he lived it.  In street parlance, “game recognizes game.” Sure, Iverson had talent, but you don’t rise from the streets of Norfolk, Virginia as an undersized guard who had done time in jail to become an NBA All-Star without heart.

And while it’s not something you can measure statistically, heart is important and Iverson recognizes that. Besides, talent evaluation is an inexact science. Just ask all of the guys who passed on New England Patriots quarterback Tom Brady.

Now, I’m not suggesting that Iverson should be the next Sixers general manager, but I do think his experiences as a player—the good and the bad—could be a good starting point.

Granted, there’s a whole lot for Iverson to learn and, and the whole suit and tie on a regular basis thing might be a deal breaker.

But if Allen Iverson approaches the opportunity to help create a good NBA team with the same conviction he did as a player, he could be a real game changer.

I hope he gets the chance.