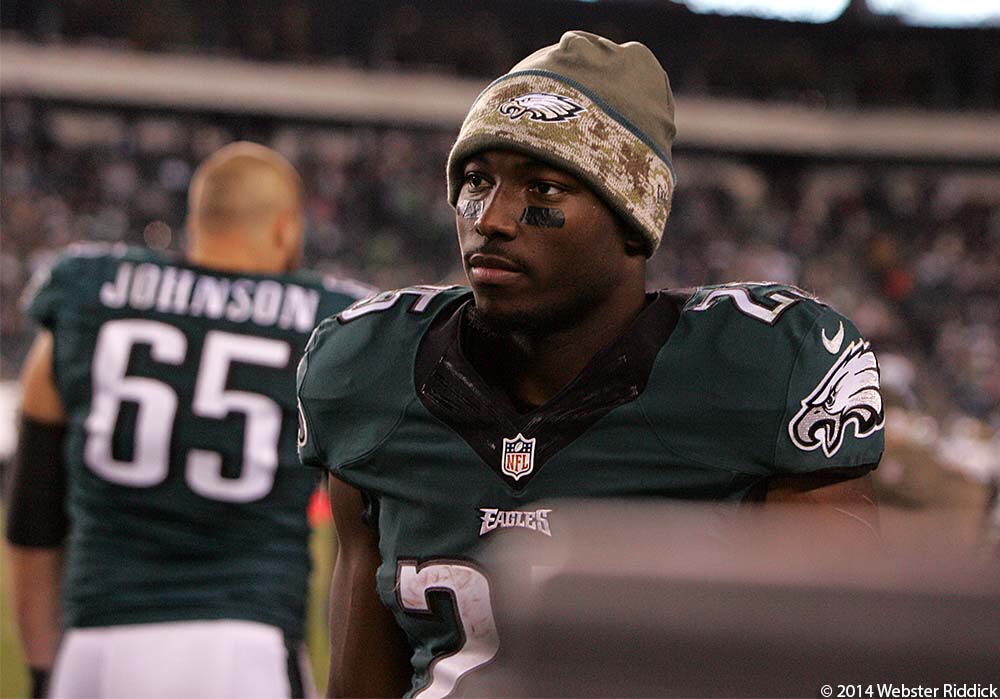 LeSean McCoy, the Eagles alll-time leading rusher, is now the newest member of the Buffalo Bills. Photo by Webster Riddick

PHILADELPHIA—The first day of NFL free agency isn’t until next week (March 10), but the Philadelphia Eagles are already making a lot of noise as head coach Chip Kelly begins his tenure as the man in charge of the team’s personnel decisions.

On Tuesday, ESPN’s Adam Schefter reported that the Birds have traded LeSean “Shady” McCoy to the Buffalo Bills for inside linebacker and former University of Oregon star Kiko Alonso. The trade can’t be finalized until 4 p.m. E.T. next Tuesday.

“I just spoke with the Eagles organization and there is no trade for LeSean at this time,” he said. “There have been discussions but nothing has been finalized.”

Soon to be former Bills running back C.J. Spiller told the NFL Network the Bills called him to inform him that the team was acquiring McCoy and that it told him that his services were no longer needed in Buffalo.

A source close to McCoy told ESPN that 2013 NFL rushing leader is frustrated by the proposed trade and is  “not going to make it easy”—whatever that means.

The trade was no doubt a cost cutting move for the Eagles because McCoy’s salary counted $11.95 million against the Birds 2015 cap. The Bills will have to pay McCoy, who is signed through 2017, $10.25 million this season.

Now the Eagles have to find a replacement for a running back in McCoy who ran for 6,792 yards rushing and averaged 100.2 yards from scrimmage in six seasons playing for the Birds. Last season, he was third in the NFL in rushing with 1,319 yards.McCoy had the best year of his career in 2013 when he rushed for 1,607 yards while leading the league in rushing.

The question is will the Eagles go the free agent route for a running back where you have guys like DeMarco Murray and Adrian Peterson of the market or find a new running back in the upcoming NFL draft with players like University of Wisconsin star Melvin Gordon and University of Georgia running back Todd Gurley.

Since Kelly’s offense is predicated upon having a strong running game, he needs to replace McCoy’s versatility at that position quickly. That’s going to easier said than done. While everyone likes to say the NFL has become a passing league, you still need a difference maker at the running back position.

The Eagles are expecting Alonso to be that tough enforcer in the middle and to play with the same level of intensity he did during his rookie with the Bills in 2013. He had 159 tackles and finished second in the NFL Defensive Rookie of the Year voting.

Before the start of last season, Alonso tore his ACL and was done for the season.  Because of this and Alonso’s history of injuries, Birds fans are wondering if Alonzo will be the second coming of Ray Lewis, or someone that the Philadelphia 76ers would have wasted a draft pick on.

Alonso will need to be a difference maker immediately for a defense that couldn’t stop snitching. The Philadelphia Eagles defense ranked a mediocre 28th in yards allowed (31st against the pass).

On the surface, this trade, along with the release of two other veterans is a sign to fans that Kelly is also maneuvering to move up in the draft to get Heisman Trophy and University of Oregon standout Marcus Mariota, whom Kelly coached.

But if he were as smart as he thinks he is, Kelly would have used McCoy as a bargaining chip to move up instead of sending him as a birthday gift to new Bills coach Rex Ryan.

This also doesn’t do anything to solve the Eagles other problems. The team is looking to re-sign wide receiver Jeremy Maclin. The needs at the cornerback and safety positions are so obvious Stevie Wonder could see them.

Kelly’s bold moves will either make him look like the second coming of Dallas Cowboys coach Jimmy Johnson and lead the Eagles to the Super Bowl or make him look like a colossal failure a la Nick Saban and other college coaches who couldn’t make it in the pros.

But in any case, the Eagles have already won the one competition they’ve scored high in since Jeffrey Lurie bought the team years ago.

They have, once again, won the Salary Cap Bowl.

One thought on “Will McCoy Trade Make Eagles Better?”