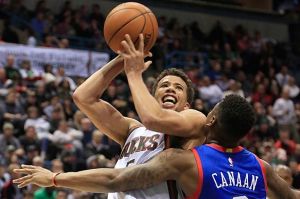 PHILADELPHIA—Now that the Philadelphia 76ers have traded 2014 Rookie of the Year Michael Carter-Williams, what’s next?

If you look at it from the viewpoint of Sixers management,Williams struggled with his outside shooting, clashed with head coach Brett Brown and wasn’t part of the Sixers’ grand vision of success.

More importantly, the Sixers got a possible top-five lottery pick from the Los Angeles Lakers in the deal. Considering the fact that the 76ers are in constant rebuilding mode, this is a good thing. Right now, the Sixers are 12-44 and will have someone hanging out in Secaucus, N.J. and looking for a magic NBA Lottery ping-pong ball.

While being in a position to land high-end draft pick is a good thing, it’s also a huge risk. For every Kobe Bryant, there’s someone who turned out to be a wasted pick. Moving forward, the Sixers and general manager Sam Hinkie had better hope that their next pick is the real deal, is ready to play upon arrival, and that there’s light at the end of this rebuilding tunnel because there’s only so much more rebuilding the fans can take.

I remember people telling me two years ago that it was necessary for the 76ers to unload point guard Jrue Holiday, who was coming off an All-Star year in 2013, by the way, to get some younger impact player.

The Sixers came away with Nerlens Noel, who didn’t play last year because of an ACL injury, and Carter-Williams, who was the 11th player taken out of Syracuse. At the time, we all gushed over Carter-Williams’ athleticism and his upside as a 6-6 point-guard.

While we all knew that Carter-Williams was a poor shooter, he played well enough to be the league’s best rookie. He averaged 15 points and 6.3 assists per game, shot at 40 percent from the floor and 26 percent from three-point range.

Before he was traded to Milwaukee, Carter-Williams shooting percentage fell to 38 percent and he was averaging just 25 percent from behind the three-point line. Yet, he was still averaging 15 points and seven assists per game.

The Sixers pulling the trigger on Carter-Williams is an example of how the 76ers and its brain trust, a title I use loosely, might not know what they’re doing. While they got rid of Carter-Williams, who could have been worked with, their two most recent lottery picks, Nerlens Noel and Joel Embiid were drafted when they had both had leg problems. The big question for these guys is will they eventually be good enough to make the Sixers a consistent winner.

So far, the reviews on Noel’s rookie year have been predictably mixed. The 6-foot-11 is one heck of a defensive player who really needs to develop his offensive game. He is averaging 8.3 points and 7.2 rebounds per game.

Noel’s defensive skills landed him a spot in the NBA Rookie game during All-Star Weekend.  He is averaging 1.8 blocks and 1.6 steals per game. According to Basketball Reference.com, the last rookie to accomplish that was Hall-of-Famer David Robinson.

Offensively, Noel needs work, lots of work.  He needs to develop some moves in the low post and he also needs to put on a few pounds, especially if he’s going to float between playing the power forward and center spots.

Meanwhile, at this year’s trade deadline, Hinkie was reportedly willing to part ways with Embiid, who has yet to put on a Sixers uniform and has supposedly put on a few pounds.

For all of his reliance on basketball’s version of sabermetrics and his endless search for the bigger and better deal, Hinkie is going to have to put a team on the floor that’s going to develop into a consistent winner.

Before investing their dollars for season tickets, fans at the very least have to see some tangible progress. If you play for the lottery too many times, you’re not winning…and you wind up being the East Coast version of the Los Angeles Clippers of the Donald Sterling years

And besides, if fans want fantasy basketball, they can get that anywhere on the Internet.