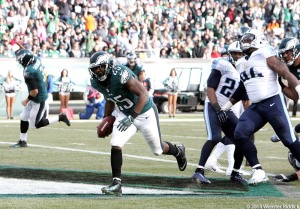 LeSean McCoy is open to have his contract restructured to keep him on the Eagles.. Photo by Webster Riddick.

PHILADELPHIA—Despite having a 10-6 record that would have easily won a weak NFC South, the Eagles missed the playoffs and are left with the feeling of what could have been if they could have only gotten out of the way of themselves.

“We’re right there,” said running back Darren Sproles. “When you get to December, you have to win in December. Even with the turnovers we were right there.”

On offense, the Eagles committed a league-leading 36 turnovers-including a combined 27 by both Nick Foles and Mark Sanchez. Those self-imposed mistakes are among the reasons the Birds are home for the postsesason.

“Coming off last year, we knew we had a good team, we started off 9-3 and to lose the way we did at the end of the season is very uncharacteristic of us,” said tight end Zach Ertz. “Usually, we get stronger as the season progresses, but we can’t put any of the onus on anybody but on ourselves.”

While cleaning out their lockers Monday, several Eagles players said despite missing the playoffs in 2014, they are close to being one of the elite teams in the NFL.

“It’s encouraging because we got 10 wins and we really beat ourselves all year,” said safety Malcolm Jenkins. “But the thing yet to be corrected for next year is can we stop beating ourselves. …That’s one thing we’ve got to stop this offseason. Once we learn two things-If we can keep the ball in front of us on defense and not turn the ball over that much on offense, we can go from a 10-win team to an elite team.”

On the defensive end, you could make the argument that the Eagles front-seven had a pretty goodseason. The Birds were tied for second in the NFL in sacks with Connor Barwin leading the way with 14.5 sacks.

The downside to that was the Eagles were next to last in the league in passing yardage yielded. Opposing teams passed for 4,238 yards against a suspect secondary. In the three-game losing streak that took the Birds out of the playoff, they gave up too many big plays in the passing game.

“There were no breakdowns, it’s just matchups and not winning those matchups,” Jenkins said. “You’ve got receivers that are at the top of their game and at an elite level. It’s hard to win those matchups on every down. A lot of those times we’ve had help over the top. We can’t double team every play and so when they had those opportunities they took advantage of it and we didn’t win.”

The weakness in the Eagles defense was their secondary. In that critical three-game losing streak, the difference in the game came down to giving up big plays in the passing game.

Cornerback Bradley Fletcher, who gave up plays of 25 yards or more in losses to Washington and Dallas, will be a free agent and so will safety Nate Allen. Don’t look for the Eagles to go out of their way to bring those guys back.

On offense, it has been widely speculated the Eagles aren’t necessarily happy with Foles has a franchise quarterback even though he’s 14-4 as a starter under head coach Chip Kelly. Foles critics point to his 10 interceptions and his struggles during the eight games he played in before he broke his left collarbone.

There has also been talk the Eagles might draft another quarterback or somehow move up to get Oregon’s Marcus Mariota or Jameis Winston.

As far as Foles is concerned, he said he’s the Eagles starting quarterback until Kelly or the organization tells him otherwise. Neither Kelly nor owner Jeffrey Lurie would say whether they were committed to him as the starter for next year.

“I expect to be the guy to lead them and win games,” Foles said. “It’s tough sitting on the sideline when you want to be out there. …It’s coming from my heart. That’s where I really expect to be and I’m going to work as hard as I can to be the best Nick Foles possible.”

The Eagles are also looking re-sign free agent wide receiver Jeremy Maclin,who had the best year of his career in 2014. He caught 85 passes for 1,318 yards and 10 touchdown passes.

The Birds also have to figure out a way to keep running back LeSean McCoy, who is due to make $9.75 million. The team could save $7.55 million under the salary cap if they release McCoy, who said he was open to restructuring his contract.

Meanwhile, Kelly said he wants to keep both Maclin and McCoy because they are important to his offense, but he also knows that he has to take the business of the game into consideration.

“Yeah, I’m in charge of the roster in terms of who our 53 are so I have to weigh in on that,” Kelly said. “But I also know there are other factors, salary cap money and the numbers and all those other things.”