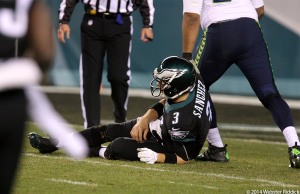 Rough day for Mark Sanchez and the Eagles offense at the hands of the Seattle Seahawks. Photo by Webster Riddick

PHILADELPHIA—To break down the Eagles 24-14 loss to the Seattle Seahawks, you don’t have to be some over-hyped ex-player turned broadcaster or someone well-versed in the Xs and Os.

The Seahawks were simply better than the Eagles, especially on defense. Looking at the numbers, Seattle’s famed “Legion of Boom” just shut down the Eagles fast-paced offense that came into the game averaging over 400 yards per game.

Seattle held the Birds potent offense to just 139 yards. The Eagles were held to under 100 yards rushing (57) and passing (82). The Seahawks held the Birds offense to just nine first downs and limited them to 45 plays. They also sacked quarterback Mark Sanchez three times and forced two turnovers.
“You can hurry up all you want but if you cannot complete passes, then it’s just quick three and outs,” said Seahawks cornerback Richard Sherman. “We had a lot of guys play fantastic football today.”

The Eagles managed to sustain just one scoring drive over 50 yards. That drive ended with a 35-yard touchdown pass from Sanchez to tight end Zach Ertz to cut the Seahawks lead to 17-14 early in the third quarter.

“We tried to establish the run. Thought we could do a better job up front,” said Eagles head coach Chip Kelly. “Obviously, we didn’t get stated the way wanted to get it started and they did a good job. ..We got them with (Zach) Ertz on one play, but besides that, there wasn’t a lot to write home about.”

The Birds other scoring drive was set up by a fumbled snap by Seahawks punter Jon Ryan early in the first quarter that was returned by Ertz to the Seattle 14.

Six plays later, the Eagles got a one-yard touchdown pass from Sanchez to Jeremy Maclin for a 7-0 lead—the Birds first and only lead of the game.

The turning point of the game came in the third quarter on the Eagles first play from scrimmage in the second half when running back LeSean McCoy’s fumble was recovered by safety Earl Thomas at the Birds 19. Two plays later, Seahawks quarterback Russell Wilson hit running back Marshawn Lynch with a 15-yard touchdown pass to give them a 17-7 lead.

“Obviously, it was terrible timing. That was my fault,” said McCoy, who became the Eagles all-time leading rusher. “I should have been more aware of ball security. The situation of the game, trying to come back and to get a turnover that fast, that was really bad.”

On offense, Wilson outfoxed the tough Eagles defense with both his feet and his arm. Scrambling around the pocket like a modern-day Fran Tarkenton, Wilson kept the Eagles defense off balance, completing 22-of-37 passes for 263 yards and two touchdowns.

Wilson also had 10 carries for 48 yards including a 26-yard touchdown run for the Seahawks first score of the game.

“There were a couple times when we had missed an assignment and that hurt us. You can’t do that against a good quarterback,” said Eagles linebacker Connor Barwin. “Russell Wilson did a really nice job. He made some plays tonight.”

After the Eagles cut the Seattle lead to 17-14 on Sanchez’s TD pass to Ertz, Wilson led the Seahawks on a five play, 91-yard drive that was aided by a 44-yard pass interference call on Eagles cornerback Bradley Fletcher against Seattle wide receiver Doug Baldwin.

Two plays later, Wilson hit Baldwin for a 23-yard touchdown pass to put Seattle up by 10. The Eagles would get no closer.

One thought on “Seahawks Defense, Russell Wilson Too Much For Eagles”