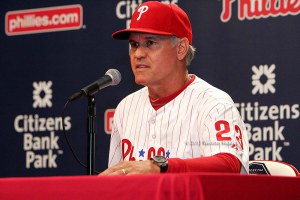 Phillies Manager Ryne Sandberg feels his team has to improve in every aspect the game.

PHILADELPHIA—At about this time last week when the Phillies went 5-2 on their last road trip, including a three-game sweep of the Atlanta Braves at Turner Field.

All of sudden there was some optimism for a hot minute in the City of Brotherly Love, especially since the Phillies are within striking distance of the leaders in the National League East even looking up from last place.

Unfortunately for the Phillies, this current homestand brought us back to a stark reality that they are still going nowhere fast. It reminds me of the two Japanese groundskeepers in the movie, “Major League,” who kept saying their team was “still sh—ty.”

Since winning five straight last week, the Phillies have lost seven of their last nine games including today’s double-header sweep at the hands of the Atlanta Brave at the Citizen’s Bank Park Saturday afternoon and evening.

The Phillies lost the first game 10-3 and the second game 5-1 to sink themselves further down in the National League East race. They haven’t been able to score more than three runs in the first three games of this series. They were 0-for-9 with runners in scoring position in the second game of the double-header.

“It is disappointing we came with momentum, a winning streak,” said Phillies manager Ryne Sandberg. “We could have won another game against the Marlins, but these last three games. … It was a tough for sure. It was a lot of things a lack of offense, a big inning there on the pitching side of things and not so good play on defense.”

The Phillies are nine games below .500 at the true halfway point of the season-game No. 81. It’s the same old problems for the Phillies—lack of hitting, poor defense and pitching, though that aspect of their game has improved significantly. Uniting the three kingdoms of offense, pitching and defense on a consistent basis has been a monumental struggle for the Phillies (36-45).

“We have to do things differently,” Sandberg said. “We definitely have to have more opportunities to score runs and then we have to actually score runs. We have to be more consistent in putting the pitching and the defense together.”

In the Phillies last nine games, they are hitting just .139 with runners in scoring position. Sandberg said he still believes his team is good enough to contend, but they have to play fundamental baseball, something they don’t do on a regular basis.

“We can definitely sharpen up on just playing clean baseball and execute in situational things,” Sandberg said. “The starting pitching has to be consistent, but we have to play good defense behind that pitching.”

In the first game of the twin-bill, first baseman Ryan Howard committed two errors that led to a pair of unearned runs that got the Braves back into the game after the Phillies had taken a 2-0 lead. The bullpen gave up five runs in the eighth.

Centerfielder Ben Revere said despite the Phillies current run of misfortune, the team is still capable of putting together a solid run to get back in the race. At the rate they are losing and the way they are playing, it just doesn’t seem to be possible that the Phillies can turn it around.

“We can go on a roll at any time, win a couple series and sweep a couple of good teams and we’re right back in it,” Revere said. “We have to keep battling. We’re at the halfway point, but it’s a long season and we have the team to do that.”

They better to do it quick because the season is not far from being on life support, if it’s not there already.