Tarasai Karega’s experiences as an African-American female collegiate hockey star has inspired inner city youth both on and off the ice. 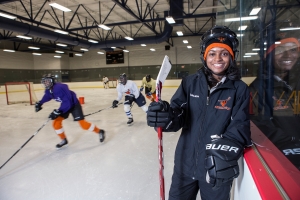 For four years Tarasai Karega has been coaching young people and inspiring them to do well on the ice and in the classroom as a program coordinator with the Ed Snider Hockey Foundation. Submitted Photo.

PHILADELPHIA—Former collegiate hockey star Tarasai Karega knows all about believing in what some would say is an impossible dream.

In a world where young African-American girls aren’t supposed to aspire to play hockey, Karega not only accomplished that dream, she became an All-American who led Div. III Amherst to a national championship.

Because she had experienced the growing pains of being a hockey player of color, Karega was able to share the experience of learning a new sport during her time working with the mostly young Black and Latino youngsters that she worked with in the Ed Snider Youth Hockey Foundation at the Laura Sims Skating Rink on 63rd Street in West Philadelphia.

“There are a lot of times when a kid falls on the ice and says they can’t do it, she said. “I think of time when I wanted to give up and thought I couldn’t do it, but I had to keep pushing through because I had this dream that I wanted to achieve. A lot of times I see myself in the kids.”

As the program coordinator of the Ed Snider Youth Hockey Foundation since 2010, Karega has found her joy in watching a growing number of young people learn to love a sport that has taken her places she could have never imagined while her helping get her education.

“Personally it’s been a great opportunity for me to help kids learn to love the sport that I grew up loving and that has taken me all over the world,” Karega said. “It’s great to be able to share with them the love of hockey.”

Karega, who is working on her master degree in sports management at Temple, will be leaving the Ed Snider Foundation in July to pursue a career in that discipline. Her accomplishments at the Snider Center have included increasing the number of kids participating in the program and helping to oversee the rink’s transition from an outdoor facility to an indoor one.

Tina Sloan-Green is the president and founder of the Black Women in Sports Foundation, an organization that specializes in connecting young women with non-traditional sports. She applauded Karega’s ability to engage parents and staff in a sport that sometimes needs explanation.
“I think she was instrumental in getting parents and young people involved because ice hockey is a hard sell,” Green said. “She could relate to young people and their parents. (Karega) came in with a passion for her sport.”
In addition to her work with the children, Karega said her greatest joy has been watching the joy of parents whose kids are excelling on the ice as well as improving their grades in the classroom.

The kids are learning that academics are important,” she said. “It’s great to see the parents get happy about seeing their children succeed in the classroom and on the ice.” 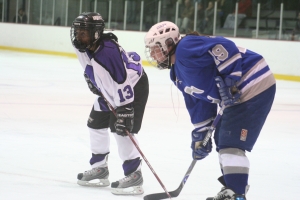 Tarasai Karega (wearing no. 13 in white) knew how to put the puck in the net during his days at Amherst. She led the Lord Jeffs to a Div. III national championship. Submitted Photo.

Karega’s insight into the sport comes from her days a youth hockey player in Detroit. During her senior year at Cranbrook-Kingswood High School in Bloomfield Hills, Michigan, she was voted Michigan’s Ms. Hockey and scored the game-winning goal in double overtime to lead her school to a state championship.

Playing for Div. III Amherst College, Karega scored 61 goals and 51 assists for 112 points in 110 games. She was a first-team All-New England Small College Athletic Conference as a sophomore and she helped lead Amherst to a national championship.

From the time she started playing youth hockey when she was nine, Karega heard all the name-calling and the cries of “Black girls aren’t supposed to play hockey!” While playing at Amherst, Karega said she got her share of extra-curricular big hits. She had a concussion during her senior year.

Instead of reacting to it with anger or the need for retaliation, Karega said her revenge was putting the puck in the net and excel on the ice.

“Yeah, I want to retaliate, I want to fight back, but increasing that score on the board is really hurting people in the long run,” Karega said with a smile. “Your play on the ice shuts people up.…putting pucks in the net is never a hindrance to any team.”

Green, who had eight girls from her program participating in the Snider Hockey program, said Karega did a good job of coaching the kids to be good teammates to help each other.

“The girls were able to be peer role models for each other and sometimes kids can learn better when they learn from their peers,” Green said.

“She brought a lot of enthusiasm and she was very personable with the kids and their parents,” said Donnell Hudson, a parent with two kids in the program. “(Karega) was good at getting the shy kids out of their shyness. She was about making it fun. … She is awesome.”

Karega said her favorite player was Detroit Red Wings Pavel Datsyuk because he played well without having to resort to fighting and being angry.

One of things that Karega hopes she has imparted to her kids, whether they become hockey player or lawyers, is to not let their anger get the best of them when they are facing adversity.
“It’s important that they learn to face challenges because life is a challenge, there’s no red carpet, there’s no booklet on how to live life without issues, racism or homophobia,” she said.

“I try to teach kids to think first and not lead with their emotions; to lead with their brains, so that they don’t regret things and someone would have learned something from them.”