Mike Schmidt Thinks Rollins could be an Hall of Famer

http://espn.go.com/blog/jayson-stark/post/_/id/819/jimmy-rollins-unique-hall-of-fame-case
By Chris Murray
For the Chris Murray Report and the Philadelphia Sunday Sun 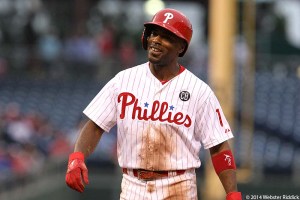 PHILADELPHIA—When you’re writing the history of the Phillies between 2007 and 2011, a period that saw five National League East titles, one World Series title, and two National League pennants, you have to start with shortstop Jimmy Rollins.

Starting with the 2007 season, Rollins boldly proclaimed the Phillies as “the team to beat.” I remember everybody including a few of my colleagues in the media thought he was crazy. Rollins backed it up with an MVP season while leading the Phillies to the first of their five division titles.

After all, that’s what a lead-off hitter is supposed to do and Rollins was definitely the spark during that run.

“When it comes to the come down, he loves to be in that situation,” said teammate Ryan Howard.

Rollins solidified his place in Phillies history Saturday by becoming the team’s all-time leaders in hits with 2,335 hits surpassing legendary Phillies third baseman Mike Schmidt. The big hit came in the fifth inning of the Phillies 7-4 win over the Chicago Cubs Saturday in front of 31,524 fans at Citizen’s Bank Park.

In typical fashion, Rollins’ record-breaking hit came leading off an inning in which the Phillies scored three runs. It was reminiscent of how his MVP season of 2007 ignited the most successful run of postseason appearances in the history of the franchise.

He got it started.

“I was able to use that time to propel the team and be part of something special,” Rollins said. “I was able to pile up a bunch of hits, but at the end of the day, it was really more about winning championships. When you’re around one organization and you’re productive, you’re going to be able to accomplish some pretty cool things and this is one of the things along the way.” 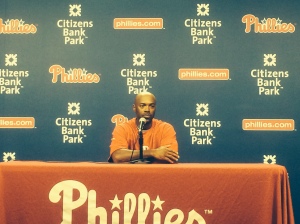 In 15 seasons in the red pinstripes, the 35-year-old Rollins has had a remarkable career with the Phillies and will no doubt have his number up on the Phillies Wall of Fame along with Schmidt and Richie Ashburn.

“I’ve had the opportunity to see a lot of hits first hand from Jimmy and he’s a special kind of player,” said second baseman Chase Utley. “I’m happy for him, it’s well deserved, playing a tough position for as many years as he has and to be able to have the success that he has is pretty special.”

Some observers including Schmidt believe that Rollins could be inducted into the Baseball Hall of Fame. A recent ESPN.com article pointed out that Rollins is one of six shortstops in the history of baseball to have over 2,000 hits and four or more Gold Gloves. He is fourth on the major league list for career lead off homeruns with 46.

“I think right now Jimmy’s stock is pretty high right now,” Schmidt told reporters after watching Rollins break his record. “I think if Jimmy retired at the end of this season, I think he’d get some serious Hall-of-Fame consideration right now.

“He’s got two or three years. He’s got some work to do. If he does that work, if he plays 140 games, gets 160 to 180 hits or maybe even a strong year or MVP year, I think he’s almost first ballot consideration for the Hall of Fame.”

Rollins said he takes it as a compliment that a great player of Schmidt’s caliber sees him as a Hall of Famer.

“To hear that from him, it made me smile,” Rollins said. “I thought it was pretty cool. I got his vote. It shows how much (Schmidt) respects what I do on the field, what I mean to this team and what I mean to the organization and I will really appreciate it.”

If there is something even harder than making it to the Hall of Fame for Rollins was living up to the tradition of great players that have come out of the Bay Area of San Francisco/Oakland. Some of those Bay area players include Hall of Famers like Joe DiMaggio, Frank Robinson, Joe Morgan and Rickey Henderson.

Rollins, who grew up in Oakland, said there was hard to live up to the deeds ofthose legendary players from his hometown. He said he’s talked to some of those players over the years.