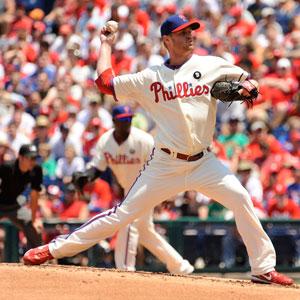 Kendrick had a shaky start against the Padre, but recovered with a solid outing with five strikeouts on seven hits with one earned run.

PHILADELPHIA—One of the things that has killed Kyle Kendrick (2-6, 4.09) in his starts this season is his penchant for struggling in the early innings.
And so what does Kendrick do in Thursday’s game against the San Diego Padres?

Kendrick gave up two runs in the first inning. It came courtesy of an RBI double by Padres third baseman Chase Headley that scored Will Venable. An error by right fielder Marlon Byrd enabled left fielder Seth Smith to score from first to give San Diego a 2-0 lead.

After the first inning, Kendrick settled down and found his groove while keeping San Diego off the scoreboard for the rest of his outing. He also got some much needed run support from the offense to get his second win of the season.

“It was about getting ahead (in the count),” Kendrick said. “After that it was strike one and making quality pitches. I was down and getting some bad contact.”

Thanks to a huge day by John Mayberry Jr. and some clutch hitting by pinch hitter Reid Brignac, the Phillies came away with a 7-3 win to complete a three-game sweep of the Padres at Citizen’s Bank Park.

It was the Phils’ second series sweep of the season since doing it to the Miami Marlins back in April (11-13).

“After the first inning, we had some good starting pitching, our bullpen was good and we had some base-runners and some clutch hitting,” said Phillies manager Ryne Sandberg. “It’s something that we want continue to do.

Starting off this homestand with the sweep can go a long way for us.”

Mayberry’s long drive sealed it for the Phillies while capping a huge day for him. He was 3-for-4 with two doubles and three runs batted in. Over his last 16 games, Mayberry is batting .412 (14-for-34) with five doubles, four home runs and 12 runs batted in.

“I think that my rhythm and timing have been a lot better and on top of that my pitch selection has been a lot better,” Mayberry said. “I think I have to allow them the opportunity to make a mistake and when they do you have to trust yourself that you’re going to put a good swing on it and hopefully the results will be there.”

Meanwhile, Brignac, who had a walk-off homer in Wednesday night’s game, once again came through in the clutch with a two-out pinch- hit double to put the Phillies on top for good. He said he was riding the moment from Wednesday night’s heroics.

“I definitely felt more comfortable at the plate today,” Brignac said. “It feels great in different situations and scenarios that come through for this team. For my teammates, it’s really a humbling feeling.”

In six innings on the mound, Kendrick allowed two runs (one earned) on seven hits with five strikeouts and no walks. He threw 105 pitches.

“He put zeroes up on the board and gave the offense a chance to score someruns and swing the bat,” Sandberg said.

After San Diego jumped out to its early lead, the Phillies cut the lead in half on an RBI single by shortstop Jimmy Rollins that scored Ben Revere, who doubled off San Diego starting pitcher Eric Stults to lead-off the inning. The Phillies tied the game in the fourth inning on a sacrifice fly by Dom Brown that scored Marlon Byrd from third.

NOTES—Fire-balling rookie righthander made his Major League debut in the ninth inning of Thursday’s game with mixed results. Throwing pitches with speeds up to 100 miles per hour, Giles gave up a home run to Padres Yasmani Grandal, but then struck out with an 89-mile hour slider Alexi Amarista to end the game.
But while he’s enamored with his own velocity, Giles said his slider is most important pitch.

“If I get ahead in the count, it’s going to be a good wipe out pitch for me just to get it over with, shut ‘em on down and get them out early,” Giles said. “If I keep doing what I did today get ahead and throw that slider even if it’s in the dirt or for strikes, I’m going to do just fine.”

Phillies shortstop Jimmy Rollins is one hit away from tying Mike Schmidt’s career record for hits.