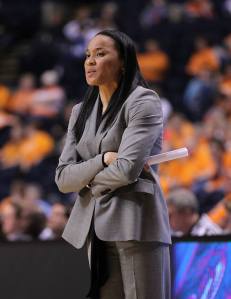 Hall-of-Fame head coach Dawn Staley has been a winner as a player and as a coach at both South Carolina and Temple.

It is often said that great players don’t make great coaches.  Apparently this adage was never communicated to Dawn Staley or Cynthia Cooper-Dyke.

Staley, one of the most decorated players in women’s basketball history is now head basketball coach of the University of South Carolina Lady Gamecocks.  At first glance, it would appear impossible for Staley to match her athletic resume, which includes being a two-time National Player of the Year (1991, 1992) while starring at point guard for the University of Virginia, playing on three gold-medal-winning Olympic teams, and 2013 enshrinement into the Naismith Memorial Basketball Hall of Fame.  However, the Philadelphia native is well on her way to achieving coaching greatness.

The Lady Gamecocks entered the 2013-14 campaign on the heels of two consecutive 25-win seasons, including a stellar record of 25 wins and only eight losses last season.  And with March approaching, Staley’s nationally ranked team is a virtual lock to make this year’s NCAA Tournament, also known as the “Big Dance.

This season, the Gamecocks are 23-2 overall and are first place in the Southeastern Conference with an 11-1 recording including Sunday’s road win over No. 19 LSU.

Staley arrived at South Carolina in 2008 to turn around the Lady Gamecocks’ basketball fortunes after a highly successful run as head coach of Temple University, where she posted a 172-80 record in eight seasons, including six NCAA Tournament appearances.

Basketball Hall-of-Famer Cynthia Cooper-Dyke won four WNBA titles as a player and is looking to bring USC back to prominence in women’s basketball.

Like Staley, Cooper-Dyke was often the center of attention during a spectacular playing career.  The fiery guard’s highlight reel included playing on two NCAA championship teams at the University of Southern California, winning an Olympic gold medal, leading the Houston Comets to four consecutive WNBA titles, and 2010 enshrinement into the Naismith Memorial Basketball Hall of Fame.

As a head college basketball coach, Cooper-Dyke also has mirrored Staley by turning losing programs into winners, including success stories at Prairie View A&M, University of North Carolina at Wilmington and Texas Southern.   When former Los Angeles Lakers standout Michael Cooper was unable to get the job done as head coach of the University of Southern California’s women’s team, Cooper-Dyke received a call from her alma mater.

Upon accepting the job she said:  “I’m very excited to coach every one of these USC players.  I’m excited about the talent we have.  I’m excited to teach and learn and motivate and really see them blossom into the players they can truly become.”

True to her words, after only a few months on the job, Cooper-Dyke’s Women of Troy are showing signs of returning to national prominence, including a home-and-home sweep of rival UCLA this season.

Under Cooper-Dyke’s leadership, USC is 16-10 overall and 9-5 in Pacific-12 Conference play and are in a three-way tie for second in the conference.

Since the NCAA began sponsoring women’s basketball in 1982, basketball has remained the most popular women’s sport and in recent years the talent has grown by leaps and bounds.  The sport’s continued rise will no doubt be fueled by coaches like Cooper-Dyke and Staley, who are committed to helping young women be successful on and off the court.

As Staley said during her Hall of Fame induction speech:  “I knew I had made the right decision to coach when I started to care more about my players than the win, and I really like wins…”

Scott Talley is a freelance writer and public relations consultant based in Detroit, Michigan.