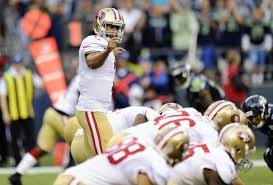 With a healthy Michael Crabtree along with tight end Vernon Davis and Anquan Boldin, 49ers might have it what it takes to win against a tough Seattle squad. Photo by the Bleacherreport.com.

When you look at the raw numbers for Sunday’s NFC Championship game, everything seems to come up roses for the Seattle Seahawks chances to get to Super Bowl XLVIII.

Over the last two years, the Seahawks are 16-1 at Century Link Field including two wins over the San Francisco 49ers—their opponents in Sunday’s NFC title tilt. They have the No. 1-ranked defense in the NFL overall — No. 1 in scoring defense and against the pass. On offense, they have quarterback Russell Wilson and a force at running back in Marshawn Lynch.

But I wouldn’t completely count the Niners out of this one.

I think the 49ers have a good shot of going up there and beating the Seahawks, even in that noisy cauldron of a stadium. It won’t be easy, but I think they can pull it off because of their weapons on offense and how they have been playing coming into this game.

The Niners three main receivers are better than any of Seattle’s wideouts. Since Michael Crabtree joined tight end Vernon Davis and Anquan Boldin back in week 11, quarterback Colin Kaepernick has completed 64 percent of his passes.

In the Niners win over the Green Bay Packers, it was Crabtree who came up huge with eight receptions for 127 yards.  In the win over the Carolina Panthers, Boldin caught eight passes for 136 yards.  Davis had a touchdown pass that put the 49ers ahead to stay late in the first half.

“It’s Boldin and [WR Michael Crabtree] Crab both. They’re doing a great job getting open. [Quinton’s [Patton] making plays, Vernon’s making plays, there is a lot of people getting open on our team,” Kaepernick said earlier this week.

If the 49ers can get running back Frank Gore going, it could be a long day for the Seahawks. The last time San Francisco and Seattle met on the Niners’ homefield, Gore gained 104 yards rushing on 17 carries including a big 51-yard run.

“I think the hardest part is because since he’s a smaller guy he gets real low, and he’s downhill. He runs downhill and behind his big tackles and guards,” said Seahawks strong safety Kam Chancellor.

“It’s just a matter of being gap sound because as a defense if you’re not gap sound good running backs like Frank Gore will find that hole. So we just have to be gap sound on defense and learn from the mistakes that we’ve had in the past.”

Perhaps the biggest reason that I can give the 49ers a chance to win is the struggles of the Seattle offense, especially the passing game.  Over the last five games, the Seahawks have averaged just 144 yards in the passing game.

In last Sunday’s win over the New Orleans Saints, Wilson was 9-of-18 for just 103 yards. But the Seahawks say they’re not all that worried about their issues in the passing game.

“I’ve said numerous times that we’ve played some terrific teams,” said Seahawks head coach Pete Carroll. “They’ve done a nice job on us and we haven’t been able to take advantage of some of the opportunities that we have. But all in all, when we take care of the football and we run the ball really well and manage the game like we have been, that gives us a great chance to win.” 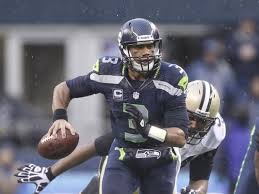 Russell Wilson and the Seahawks passing game has struggle over the last five weeks. Photo by USAToday.com.

Meanwhile, Wilson said there’s nothing overly complicated other than he just has to put the ball in his receiver’s hands.

“I think the biggest thing is to  be more accurate on a couple throws I normally make,” Wilson said. “That’s what it comes down to. It’s nothing I need to search deep down for or go study a whole bunch for. It’s just put the ball on the money right where you need to be.”

When you have Lynch in your backfield, Wilson may not need to do as much in the passing game. Lynch gained 140 yards on 28 carries in the win over the Saints including a game-clinching 31-yard touchdown run.

This game will no doubt be a physical game because both defenses are capable shutting the other team down. Seattle opened the playoffs last week by keeping the explosive Saints offense off the scoreboard until late in the game despite allowing over 400 yards of total offense. The Seahawks held highly-touted Saints tight end Jimmy Graham to just one catch.

In their battles against the 49ers in Seattle, the Seahawks defense have shutdown Kaepernick and the Niners’ offense.  The last time San Francisco played at Century Link Field, the Seahawks intercepted the former Nevada star three times and sacked him three times.

Meanwhile, the 49ers had two interceptions of Panthers quarterback Cam Newton and sacked him five times while shutting down the Carolina running game.

The last time San Francisco saw Lynch they held him to under 100 yards on the ground. Niners linebacker Patrick Willis said his team has to focus on shutting down the Seattle offense whether it’s Lynch on the ground or Wilson running to buy time in the passing game.

“[Lynch] is just a tough guy to bring down. There’s no question about that,” Willis said. “Russell Wilson, he’s able to scramble and able to throw the ball as well. So, we just have to play a complete game.”

It’s hard to pick against the Seahawks in their house with that defense and Lynch on offense, but I think the 49ers receivers will be the difference in this one. Look for the Niners to spring the upset, 27-23.