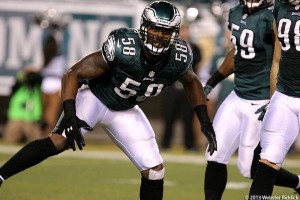 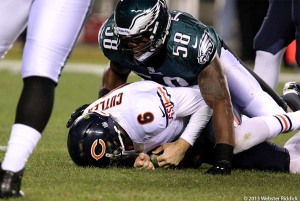 PHILADELPHIA—One of Trent Cole’s favorite pastimes, whether it’s on or off the field is hunting.  Off the field, it’s usually a deer running through the woods within the periscope of Cole’s shotgun.

On the field, Cole has always had a passion for hunting down quarterbacks and putting them to the turf.  In the Eagles 54-11 blowout of the Chicago Bears at Lincoln Financial Field, Coles hounded Bears quarterback Jay Cutler as if he were a Lion stalking its prey.

“He doesn’t know what he means to this team,” said Eagles inside linebacker Mychal Kendricks. “He just goes out there and he just plays his heart out. I don’t think he realizes the type of energy and the type  of charge he gives the offense when he makes those big time plays on third down.

“When we see him make a play, here’s a guy still doing what he’s doing, raising the bar on every play. He just goes, man. …He’s a big part of this team.”

Cole had three of the Eagles five sacks on including one on the game’s third play that forced an early Bears punt. After the game, Cole’s teammates said he set the tone for the defense with his aggressiveness.

“We just had to put him into situations where he is able to rush the passer and showcase his talents.”

Cole said he likes to be the catalyst of the defense and to make things happen to get the team going.

With the new coaching staff and the Eagles 3-4 defense, Cole had to make the difficult transition from being a defensive end in a three-point stance to a stand-up outside linebacker, something that wasn’t all that easy for him.

“I kept a great attitude about it. That transition from eight years as a defensive end and now transitioning into a linebacker in my ninth year is kind of hard, you got to suck it up,” Cole said. “I told myself that I was going to be great at this position. I kept a good attitude about it and listened to the coaches and talked to some of my teammates about how to play outside linebacker.

“Things are going good for me, I’m just going to keep improving and doing what I can.”

So far this season, Cole has eight sacks from the linebacker spot, not bad for a guy who hasn’t played the linebacker position during his professional career.

“It’s a tough transition when you ask a guy who has been rushing for 10 years to drop back and cover zones and things like that. That’s a big chance,” Ryans said. “That’s a big change. He’s an unselfish player and he does whatever we need him to do for our team to win.”