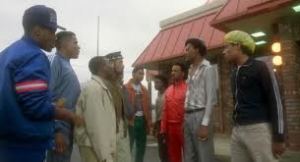 PHILADELPHIA—One of my favorite scenes in Spike Lee’s School Daze is when the brothers from Mission College, led by Vaughn “Dap”  Dunlap (played by Laurence Fishburne) get into argument with the brothers from the “hood” with their leader, played by Samuel L. Jackson.

In that scene outside of a Kentucky Fried Chicken restaurant, Jackson’s character questioned the Blackness of the college kids and said: “College don’t mean shit. Y’all niggas and you gonna be niggas forever, just like us, Niggas.”

And that moment, Dap looks Jackson’s character in the eye and says: “You’re NOT niggas.”

It was a tactical retreat for the college kids and at the same time, Dap restored the dignity and humanity of Jackson’s character and his cohorts. Even as they were telling the Mission kids to get away from them, the brothers from the community were stunned because Dap saw something good in those broken men that they could not see in themselves.

Given all the noise surrounding the gratuitous use of the N-word by a white Miami Dolphins offensive lineman who was considered to be a “brother” by his misguided African-American teammates, the Fritz Pollard Alliance, a group that promotes diversity in pro football, recently called for NFL players to stop using the word and for the league to impose a penalty if it’s used during the course of a game.

“Men like Kenny Washington, Woody Strode, Bill Willis, and Marion Motley bravely withstood the indignity of the ‘N’ word during a time when black men were beaten and even hung simply because of the color of their skin,” according to a statement released by the Alliance. “Indeed, the ‘N’ word was the last word that countless blacks across the country — in large cities and small towns — heard before being killed in racist attacks. To use it so loosely now is a disgrace.”

Quite frankly, I think it is time that we, as African-Americans, stop using the “N” word, under any circumstances. In fact, I think it’s time that we stop using language in our music or any other venue to dehumanize each other—which means you can also stop using terms that denigrate women such as “bitches” and “hoes.”

As the late comedian Richard Pryor so eloquently stated back in the early 1980s, “We never was no niggers. That’s a word to describe our own wretchedness. We perpetuate it. That word is dead because we’re men and women.”

It was a word that was constantly whipped and beaten into our ancestors by the white slave owners to remind them that they were nothing more than chattel. The N-word was a word that terrorized Black people though lynchings and other acts of violence when Jim Crow laws were imposed on African-Americans in the South.

It was the word that Jackie Robinson heard as he integrated baseball.

It was the word that the Little Rock Nine heard on their way to Central High School.

It was how George Zimmerman saw Trayvon Martin before he shot and killed him.

The N-word is that constant lie that has given Black people in America the impression that we are inferior because of our skin color. What’s sad to me is that we buy into that lie to the point where white people don’t have to use the word anymore to knock us down—we do it for them.

It’s a word that young Black men utter as they kill each other in places like Chicago and Philadelphia. It’s a word that right-wing politicians use when it supports policies that defund public schools, send jobs overseas and cut programs designed to help poor people.

I do not subscribe to the notion that we have somehow de-fanged the N-word’s by using it in casual conversation or music. There’s nothing affectionate about it. There is no “hood pass” that you should ever give to a White person that allows them to use this word.

And if you’re still tossing it around Black people, you’re subconsciously buying into the white supremacist notion that deems Black as less than human.

Brothers and sisters when you see me in public, I am not your “nigga.” You can call me brother, man, sir, Mr. Murray or Chris if I give you permission.

The best way to lessen the effect of the N-word is to not use it. It is not an accurate description of who we are and yet we continue to use it because we hate ourselves.

To me, the use of the N-word, whether it ends with an “a” or “er” is a lie that imprisons our minds and cuts us off from our humanity. It reminds me of the character Dr. Mannette in Charles Dickens, “A Tale of Two Cities.”

As a prisoner in the Bastille, Mannette was beaten and degraded so much that he went insane and forgot that he was a brilliant doctor instead of the shoemaker he was forced to become. That has been the Black experience in America.

And so to repeat what Dap said in School Daze: “You’re not Niggas!”

One thought on “You’re Men and Women, Not the N-word”