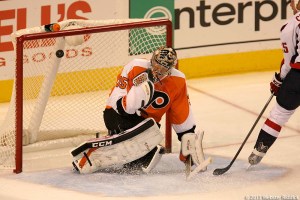 Steve Mason gives up to goal to Washington’s Jason Chimera as the Capitals scored five goals in the second period. Photo by Webster Riddick.

PHILADELPHIA—With Washington’s prolific goal-scorer Alexander Ovechkin out with an upper body injury and his teammates playing the final game of a five-game road trip, you would think that this would be an opportunity for the Flyers to score a few goals and possibly steal a win.

The Flyers were also hoping that left winger Steve Downie, who was acquired by the Flyers from the Colorado Avalanche in a trade for Max Talbot, would provide some scoring punch. That didn’t work either. He left the game in the second period and was taken to Pennsylvania Hospital to be treated for concussion symptoms.

Instead, the only team doing the stealing was the Capitals who took what they wanted in a 7-0 shutout of the Flyers in front of 19, 702 disgruntled fans at the Well Fells Fargo Center.  The fans took their disgust out on team general manager Paul Holmgren by chanting, “Fire Holmgren.”

“I can’t blame the fans,” Holmgren said. “We’re as frustrated as they are.”

The booing and chanting came during the second period when Washington (6-7-0) scored five goals to pretty much end the competitive portion of the game. The fortunes of a team that can’t score got even more complicated by their inability to stop the other team from putting the puck in the net.

In short, the Flyers (3-9-0) got their collective rear-ends handed to them on the scoreboard. It was no doubt the low point of what has been tough season.

“It can’t get a whole lot lower, can it?”  Flyers head coach Craig Berube asked rhetorically after the game. “Everybody’s been involved in these games before. You can’t sit there and dwell upon it. You gotta play a game (Saturday against the New Jersey Devils). Compete tomorrow, work real hard. That’s what you do.”

Speaking of Holmgren, he addressed the team during the second intermission to express his own disgust at the way the Flyers were playing.

The only thing Flyers fans had to cheer about was a third-period melee which resulted in 114 minutes of penalties. For the game, the teams had 164 minutes worth of penalties.  It started with Wayne Simmonds fighting Capitals right winger Tom Wilson and that escalated into a brawl between Vincent LeCavalier and Caps defenseman Steve Olesky.  Just as Brayden Schenn was mixing it up with Washington defenseman Alexander Urbom, Flyers goalie Ray Emery sprinted down the ice to put a beat down on Capitals net-minder Braden Holtby.

“As a group we were frustrated tonight, our fans are frustrated,” Emery said. “Things didn’t go our way. We all grew up playing hockey and sometimes that happens. We don’t take losses like that.”

Berube said the third period brawl showed that his team wasn’t going to lay down and quit.

“They care,” Berube said. “They’re frustrated. That’s what it boils down to.”

Vincent LeCavalier gets into a brawl with Capitals defenseman Steve Olesky in the third period of a 7-0 loss to Washington. Photo by Webster Riddick.

Added Holmgren: “They were getting slapped around. It’s a response. Do I have an issue with it? No.”

If this game was scored on a 10-point must system, the Flyers would have won hands down. It’s too bad the Flyers can’t score the way they can fight. If they shot pucks into the net the way their fists hit the faces of Capitals players, they might be Stanley Cup contenders. The video of this brawl will probably go viral on social media sites and will also go to the NHL offices for possible suspensions.

In the first period, the Flyers out shot Washington 8-4, but when the clock hit zero to end the period, it was the Capitals with a 1-0 lead.  With 2:32 left in the period, Washington was able to get on the board when Nate Schmidt took the puck that caromed off the stick of  Simmonds and passed it to Erat Martin, who found Backstrom in front of the circle to left of the goal. Backstrum shot the puck past Mason for the score.

What made things even more disheartening was that the Flyers held the Capitals without a shot on goal for the game’s first 15 minutes.

“We played pretty good (in the first period), they got the goal, we didn’t respond,” Berube said. “That’s what I saw.”

Things didn’t get any better for the Flyers in that fateful second period either as Washington exploded to score five goals-three within the first five minutes of the period. The Caps scored the first of those goals in 1:24 of the period when Ward got in a shot past Mason.  A little over a minute later, left winger Jason Chimera scored to make it a 3-0.

That goal got Mason pulled from the game, but that didn’t stop the Capitals from scoring. Backstrum got his second goal on another shot between the blue line and circle that went past Ray Emery. Just five minutes into the second period the Capitals had an insurmountable 4-0 lead.

Washington added two more goals-including Backstrum’s third and another in the third to complete the rout.