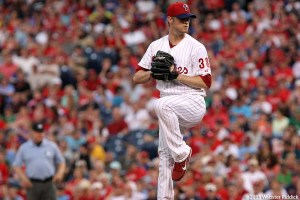 PHILADELPHIA—On nights when the Phillies commit more than one error, it usually results in a win for the other team.

Thursday night, the Phillies committed four errors, but they somehow figured out a way to overcome their miscues and score enough runs to come away with a 3-1 win over the Washington Nationals in front of 40, 086 fans  at Citizen’s Bank Park

For the Phillies (46-47), it was their third straight series win as they took three out of four games from the second-place Nationals (47-45). The Phils are one game below that elusive .500 mark once again.

Starting pitcher Kyle Kendrick (8-6) had a strong performance on the mound. In seven innings, he allowed just one on five hits with two strikeouts and just one walk.  Manuel said Kendrick did a good job of fighting his way out of some rough spots.

“I thought he really had to battle because we made some mistakes, there was some sloppy play and he was the guy that got us of out of some jams,” Manuel said.  “He made pitches when he had to. He did a super job.”

Somewhere sandwiched between some of the gaffes in the field, there was an outstanding defensive play in the first inning that helped Kendrick and prevented Washington from taking an early lead.

Nationals rightfielder Jayson Werth poked a two-out single to left. Bryce Harper tried to score from second base but was gunned down at home plate by Phillies left fielder Domonic Brown.

“It was huge,” said Kendrick. “Obviously in the first inning, we didn’t want to get down there. He made a great throw. It could have been a big game-changer for sure. …It was big.”

Every time the Phillies committed an error or there was a wild pitch, Kendrick would get out of it with a double play. In the first, a dropped fly ball Chase Utley, who committed three errors, was followed up by an outstanding throw to get Harper out at the plate.

A two errors by Utley in the fourth put Werth on third base with two outs. Kendrick got second baseman Anthony Rendon to fly out to right to end the threat.

In the fifth, a throwing error by third baseman Michael Young allowed Nats catcher Kurt Suzuki enabled him to reach second. But the Phillies survived that inning because Ruiz fielded Jordan Zimmerman’s bunt attempt and threw out Suzuki at third.

Kendrick got Denard Span to hit into an inning-ending double play that went from Ruf, who stepped on the bag at first get Span and then threw to Rollins covering second to get Jordan Zimmerman.

With the Nationals All-Star pitcher Jordan Zimmerman (12-4) on the mound, the Phillies were going to have to figure out ways to get some runs and they did just that. The Phillies got eight hits off Zimmerman and scored two runs. The Nats best pitcher had six strikeouts.

“It was good pitching on both sides,” Manuel said. “Zimmerman was good. He was real good. Kendrick was right there with him and rose to the occasion. Zimmerman did a good job. We were to score on him.”

The Phillies broke open a scoreless game in their half of the fifth inning and took a 1-0 lead on RBI single by center fielder Ben Revere that drove home Ruiz who reached on an infield and advanced to second on a sacrifice bunt by Kendrick.

Washington evened the game in the top of the sixth inning on a sacrifice fly by Nationals third baseman Ryan Zimmerman that drove home Harper, who reached on a one-out triple to right.

The Phillies took the lead for good in their have of the seventh inning.  First baseman Darin Ruf doubled to center. He was replaced at second John McDonald, who scored the go-ahead run on a 0-2 pinch-hit double to right center by Kevin Frandson.

“It was just choke and poke right there,” Frandsen said. “Seriously. I’m not a big strikeout guy. I was just going to put in play. You never know you put a ball in play, good things happen.”

The Phillies bullpen tandem of Antonio Bastardo and Jonathan Papelbon kept the Nationals hitless and scoreless in the eighth and ninth innings. Papelbon got his 20th save of the year.