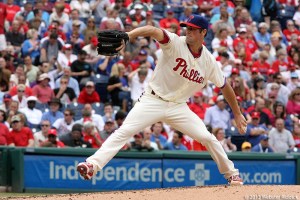 PHILADELPHIA—Now that Cole Hamels has won his last two starts, is it now safe to say that the Phillies lefthander has his mojo back?

If you’re looking for proof of that, all you need to do is look at how Hamels pitched his way out of a bases-loaded jam in the top of the eighth against the Washington Nationals.

First, Hamels struck out Nats third baseman Ryan Zimmerman swinging at a 93-mile an hour fast-ball.  After manager Charlie Manuel visited him on the mound, Hamels then retired the dangerous Jayson Werth on a long flyball to center to end the Washington threat in the eighth.

In eight innings of work, Hamels allowed just one run on six hits with four strikeouts and the Phillies came away with a 4-2 win over the Washington Nationals in front of 33, 502 fans at Citizen’s Bank Park.

“What I was able to do early on was to get the quick outs,” said Hamels, who threw 110 pitches. “I know it’s hot, but I was still able to maintain the energy and intensity level. That was the most exciting eighth inning I have had in a long time, especially with it not being a sell-out, it seemed like 60,000 fans. That was awesome to see that from the fans. It definitely brought the energy back.”

Considering how Hamels has struggled in 11 losses this season, getting two straight solid performances from him is like manna from heaven for a Phillies team trying to scrap their way back into the pennant race.

“Stuff-wise he’s been there the whole time,” said third baseman Michael Young, who drove in a pair of runs with an RBI-double in the sixth. “It’s a matter of just letting the game come to him. We know that in time, Cole is going to be one of the best pitchers in the league. It’s just who he is. It would be nice to have Cole and Cliff (Lee), those two guys at the top of our rotation to set us up.”

It was the Phillies third straight win and their fourth in their last five games. The Phils (45-46) moved to within one game of .500.  Antonio Bastardo got the save for the Phillies, allowing one hit, one run and a walk.

Getting beyond the .500 mark has been a challenge for the Phillies all year. But Young said the Phillies have to focus on winning the next game and instead of thinking about going on a “hot streak.”

“We’re putting too much on our plate. We’re thinking about a game that is maybe a week and a half away instead of bearing down on the one in front of us, especially when we’re playing a good club,” Young said.

As well as Hamels pitched against the Nationals, the Phillies offense scored enough runs to support his solid effort.

After the Nationals had taken a 1-0 lead on a solo home run by Werth in the second inning, the Phillies tied the game in the fourth on a RBI single by Domonic Brown that scored Chase Utley who reached on a two-out double.

The Phillies broke the game open in the sixth.  After singles by Ben Revere and Jimmy Rollins, Utley hit a ground ball to first baseman Adam LaRoche who tried to cut Rollins down at second. But the ball got ball got past shortstop Ian Desmond and into center field enabling Revere to score from second.

Young’s double scored Rollins and Utley to give the Phillies a 4-1 lead. The Nationals scored a run in the ninth on an RBI double by pinch-hitter Wilson Ramos that scored Anthony Rendon.