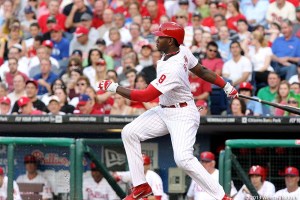 PHILADELPHIA—If you have been watching Domonic Brown’s performance during the month of the May, hopefully you will have an appreciation for the idea that you have to let your best prospects go through the growing pains of being a major leaguer.

Brown had a .688 slugging percentage and .991 OPS (combined slugging and on-base percentage) the in the month of May.

In seven games this week (May 27-June 2), Brown batted .444 with a triple four home runs and 13 runs batted in. He leads the National League in homeruns with 17, fifth in runs batted in with 42, and has homeruns in nine of his last 10 games including Monday night’s win over Miami.

With second baseman Chase Utley and catcher Carlos Ruiz on the disabled list and Ryan Howard struggling to his stroke while playing a sore left knee that’s probably worse than what he or the team is saying it is, Brown has carried this team on the offensive end.

At various times in the last couple of years, fans and quite a few media people have called on the team to trade the guy. Nowadays, Brown is now becoming the toast of the town.

Brown’s current success goes back to the idea of why you have to be careful of how you bring along your prospects and to not be so quick to discard them when they initially struggle at the major league level.

The Phillies injury situation and their current record give them unique opportunity to see what they have in their younger players from their farm system.

Infielders Freddy Galvis, who had a walkoff home run in a win over the Cincinnati Reds last month and Cesar Hernandez, both of whom have gotten considerable time with the team since Utley has been out of the lineup. Hernandez got his career RBI in Monday’s game against the Miami Marlins.

“Cesar is at the point where next year, he’s out of options, so it’s nice to find something about him,” said Phillies general manager Ruben Amaro Jr. 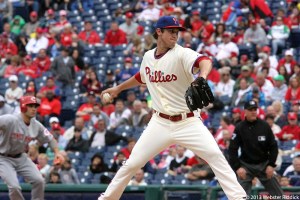 After giving four runs in the first inning, Rookie Jonathan Pettibone is getting some value experience with the injury to John Lannan. Webster Riddick.

With veteran pitchers Roy Halladay and John Lannan on the DL, 22-year-old Jonathan Pettibone has a 3-1 record with a .3.64 earned run average in eight games as a starting pitcher. He has 32 strikeouts and 19 walk. Even when Lannan comes back, Pettibone will still be in the rotation.

The Phillies have also gotten a look at Tyler Cloyd, who is 1-2 with 4.76 ERA, but has done a decent job as a starter with the exception of one bad outing last week in Boston.

Let’s face it, the Phillies run of success from 2007-2011, which netted one World Series, two National League pennants, and five NL East crowns along with the rise of stars like Howard, Utley, Jimmy Rollins and Cole Hamels is either over or not that far from it if you’re an optimist.

The young players and the Phillies might struggle for a couple of years. But if they can somehow get as hot as Brown has this year, the future may not be such a bad thing after all.