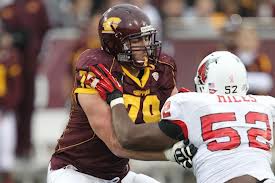 The biggest concern that Eagles fans have coming into this draft other than who they’re going to take with the fourth pick is whether or not this draft as a whole will yield better results.

In the 2010 and 2011 drafts, the Eagles only three players from that group, center Jason Kelce, and safeties Kurt Coleman and Nate Allen, have emerged as starters from that group. Players like wide receiver Riley Cooper and tight end Clay Harbor have been solid backups.

That’s something that even the Eagles front office acknowledges, but this year Eagles general manager Howie Roseman said the team is in a better position to find what they think is the best athlete available rather than drafting to fill a need, especially after filling some holes during  the recent free agent signing period.

“What we learned is that you can’t force your board,” Roseman said. “You can’t have some much urgency in filling a need that you change the evaluation process.   We talked about that a lot it’s something we won’t do it again.

“It was the lure of how close we felt we were close to winning a championship and I think it was the mindset of trying to do whatever takes to win that championship.”

For a team that finished 4-12 last season, the best athlete available in this draft whether it’s the fourth pick or the 140th  will be somebody that the Eagles definitely need for both now and the future.

“I think there are some quality players in this draft, and that’s our job to kind of figure that out,” said Eagles head coach Chip Kelly.  “I don’t think by any stretch of the imagination there is a slam dunk anywhere.”

So let the speculation and the revisions to your mock draft begin.

Even with Michael Vick, Nick Foles and Dennis Dixon competing for the starting job, you get the feeling that Kelly wants a younger player that he can take under his wing and develop for his read-option system.

Whether the Eagles take a quarterback or any position with the fourth pick might hinge on whether or not Kelly likes what he sees on film during this week’s round of minicamp with the veterans.

“When you get to see them on the field for three straight days, running around doing things, it gives you a better understanding of what your team is and kind of where they are,” Kelly said when asked if this week’s minicamps would influence the draft.

“There are going to be some guys that maybe they were looked at as a guy that wasn’t as highly touted, but really fits into what we do, and maybe some other guys that are highly touted that aren’t exactly the right fit.”

Would Kelly and Roseman really take a quarterback with the fourth pick in a draft where there’s plenty of offensive linemen, especially considering that the Eagles have two offensive linemen in their 30s in Jason Peters and Todd Herremans who are coming off injuries?

The popular choice among some observers is Central Michigan’s Eric Fisher (6-7, 300 pounds) while others are looking at Texas A&M’s Luke Joeckel (6-6, 306), the 2012 Outland Trophy winner.  Roseman said he likes the depth at offensive line for next week’s draft.

“There are some really talented offensive linemen in this draft along with some defensive linemen,” Roseman said. “This is a meat and potatoes draft.  Certainly in the first couple of rounds with lineman it’s going to be exciting. It’s hard to find big guys who can move and play with power.”

Given how beat up the Eagles quarterbacks were last season, an offensive lineman is probably where the Birds will go, especially with that fourth pick.

More than likely, the Kansas City Chiefs, who have the first pick will probably go either one of two ways—they will go after Utah defensive tackle Star Lotulelei or they will take Joeckel, given Andy Reid’s affinity for offensive lineman.

If the Chiefs opt take an offensive lineman Joeckel or Fisher, the Eagles couldn’t go wrong with taking Lotulelei, who has been compared to Baltimore’s Haloti Ngata and Detroit’s Ndamoukong Suh as a guy who can plug up the middle and rush the passer.  If Lotulelei (6-4, 325) is really that good, the Eagles will have a beast in the middle of their defense—whether they go with a 3-4 or 4-3 defense.

Some mock drafts have Philly native Shariff Floyd (6-3, 297) out of Florida going to Jacksonville the team with the second pick, but if he’s available by the time the fourth pick the Eagles might pick him up, especially if you buy into the idea that the Birds are looking for the best athlete available.