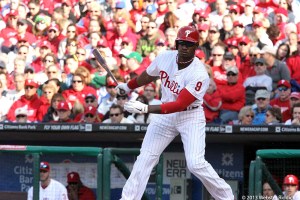 Brown’s three-homer in Wednesday’s win over the Mets sailed over the Budweiser sign into the second deck at Citizen’s Bank Park. Photo by Webster Riddick.

For the Chris Murray and the Philadelphia Sunday Sun

If you’ve been crying the blues about the Phillies struggles this week—poor starts by Roy Halladay and Cole Hamels, remember that it’s only April and nine games into the season.

Phillies manager Charlie Manuel made it clear that he’s not as worried as some Phillies fans might be at this point in the season.

After losing five of their first seven games, the Phillies (4-5) closed out the first homestand of the year by winning two straight including Wednesday’s 7-3 win over the New York Mets at Citizen’s Bank Park.

“It’s great to get that first series under our belt and just try to carry the momentum to Miami on this road trip,” said Phils first baseman Ryan Howard. “We’ve had a couple of situations where we’ve come up short in games. These last four or five games we’ve been going out there and just swinging.”

The Phillies will embark on a six-game road trip that will take them to Miami and Cincinnati. They will be back at the ball park in South Philly on April 18 when they start a three-game series against the St. Louis Cardinals.

“We definitely need  to play the Marlins and we have to win series and take it one game at a time,” Manuel said.

The Phillies got off to a hot start offensively in the first inning—they got a two-run homer from Chase Utley and a monstrous 3-run shot from Domonic Brown that went over the Budweiser sign and into second deck in right field to give them a 5-0 lead.

“I think we started to get good balls to hit and started swinging the bats good,” Manuel said. “I felt like out hitting picked up because we were leaving runners on base and things like that.  It was just a matter of time we started getting some hits with guys on.”

The Mets would get one back via the long ball on a solo shot by catcher John Buck in the second inning and another solo homer by Lucas Duda in the top of the fourth. The Mets leftfielder would get another solo home run in the eighth off Phils reliever Mike Adams.

“It was important that he took us where we wanted to go,” Manuel said. “He pitched out of some jams. Tonight, he definitely did that tonight.”

But in the midst of his struggles, Kendrick managed to survive a 27-minute rain delay and pitch his way out of some tight jams after seeing his team jump out to a big lead. After Buck’s homer in the second, the Mets loaded the bases with one out.

Kendrick got out of it back striking out pitcher Jeremy Hefner and centerfielder Jordany Valdespin to get out of the inning.

“It’s always nice to get out of jams,” Kendrick said. “You try to minimize the damage and stay away from big innings.”

In the fifth inning, Kendrick gave up a single to Valdespin and walked second baseman David Murphy.  Then he struck out Mets third baseman David Wright for the first out of the inning. While pitching to first baseman Ike Davis, Kendrick uncorked a wild pitch that moved the runners to second and third.

Kendrick managed to get out of the inning thanks to the speed of centerfielder Ben Revere and the dumb base-running of Murphy.  Revere ran down a short fly ball by Davis and then tossed the ball to second to double up Murphy, who didn’t tag up and apparently thought the ball was going to drop.

“That was a big spot in the game,” Kendrick said. “I guess (Davis) thought Ben might not have gotten to it, but I was happy, happy, happy.”

Meanwhile, the offense added a couple of insurance runs in the bottom of the sixth thanks to a two-run homer by pinch hitter Laynce Nix.