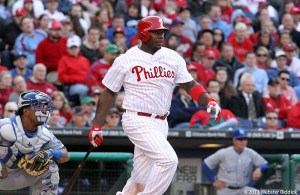 Ryan Howard hit his first home run of the year Tuesday in the Phillies win over the New York Mets. Photo by Webster Riddick.

RYAN HOWARD GETS FIRST HOME RUN OF YEAR, MICHAEL YOUNG IS ONE HIT SHORT OF  THE CYCLE.

Earlier this week, Charlie Manuel had talking about the need for his team to start putting every aspect of their game together to start winning on a consistent basis. That means solid pitching and hitting, something they haven’t had much of so far this season.

In the second game of their three-game series against the New York Mets, the Phillies finally got a good game from the guy on the mound and some firepower from their bats in their 8-3 win Tuesday night at Citizen’s Bank Park.

“I saw them hit the ball and they hit it real good,” Manuel said. “We were fortunate enough to get some runs early. It’s a matter of time that we’re going to have some good nights when we do knock them in and getting them on first is important and the most thing is knocking them and scoring runs.”

Starting pitcher Cliff Lee (2-0) has been the most consistent element of the Phillies starting rotation so far this season.  Tuesday night, the Phillies lefthander served up a gem by pitching eight and two-thirds innings, allowing just three runs (two earned) on eight hits. He struck out six and had zero walks.

“I was just throwing strikes and making them swing their way on base,” Lee said. “We were making plays, being aggressive and trying to staying away from hitter friendly counts. “

Lee even helped himself at the plate. He was 1-for-4 with a run batted in. Phillies third baseman Michael Young described him as a baseball player who happens to be a pitching.

“Cliff’s awesome. I’ve always liked to play behind Cliff,” Young said. “He loves to compete. He has a bad at-bat and he’s pissed. It’s fun to play with a guy like that.”

When Lee was taken out of the game in the ninth, the fans, probably tired of the poor performances by the bullpen, booed Charlie Manuel while giving Lee a standing ovation.

“It was tough,” Manuel said. “I want Cliff to finish the game, but at the same time, I didn’t want him into no big inning where throws 25 or 30 pitches either. He wanted to stay in of course.”

Now in Manuel’s defense, Lee did throw 106 pitches up to that point and given how the rest of the pitching staff is going right now, the Phillies are not in position to risk any injuries.

Meanwhile, the middle of the Phillies lineup awakened from their slumber in a big way thank to the long ball. With the Phillies already leading 4-0 in the third, Ryan Howard and Young hit back to back homeruns. Later in the inning, rightfielder John Mayberry Jr. also hit a home run.

“For awhile we had trouble getting that big hit,” said Young, who was 3-for-4 and was a double short of the cycle. “We kept saying to ourselves as long as we keep getting out there. That’s the important thing. Eventually, we’ll start moving them in. Hopefully, this is the start of something good.”

The Phillies started the scoring in the bottom of the second by jumping out to a 4-0 on an RBI double by Mayberry that scored Young and Domonic Brown.  The Phils also got an RBI single from Lee and an RBI double from Jimmy Rollins.