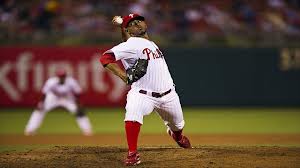 Antonio Bastardo along with Mike Adams kept the Royals from scoring to keep the Phillies in the game.

PHILADELPHIA—The Phillies got everything that they could have hoped for out of John Lannan.  He allowed three runs on five hits, five strikeouts with no walks in seven innings while giving the Phils beleaguered middle relievers a much needed rest.

Coming into the bottom of the ninth, it looked like Lannan’s efforts would be for naught as the Phillies had just two hits and were down 3-1. When Domonic Brown and John Mayberry Jr. struck out with the bases loaded after Chase Utley, Ryan Howard, and Michael Young walked to start the inning, things were appearing even more bleak for the Phillies, who down to their last out.

But pinch hitter Kevin Frandsen saved the day for his team with a three-run double to give the Phillies a 4-3 walk-off win over the Kansas City Royals in front 39, 475 fans at Citizen’s Bank Park Saturday night.

“It was a super game. We didn’t have much going for us until that last inning and we came from behind and Frandsen got that big hit for us,” said Phillies manager Charlie Manuel. “Lannan did a good job. He took us to a good spot in the game for us to get the strong part of our bullpen in the game.”

Frandsen said he was just glad to support the efforts of Lannan and the rest of his Phillies teammates who had a tough time getting hits against Royals starter Luis Mendoza, who allowed just one run on two hits in six innings of work.

“First and foremost you have to look at what John (Lannan) did tonight. He pitched his ass off for us tonight in his first start for us. That was huge,” Frandsen said. “To get to the ninth with Chase (Utley),  Howie (Ryan  Howard) and Mike (Young) having some unbelievable at-bats to get the bases loaded. It sums up the whole thing.

“Getting a hit was the icing because those guys grinded out at-bats to do something and I was fortunate enough to get it done.”

Though Lannan didn’t get the decision, he said he was glad to have a quality start for the Phillies considering the struggles of the bullpen in the first game of the series against the Royals. He didn’t allow hit in the game until fifth inning.”

“Whenever the bullpen goes out there and throws a lot of innings, you try to go as deep as you can into the game and help them out,” Lannan said.

One of the key plays in the game occurred in the seventh inning.  Phillies catcher Humberto Quintero picked off Miguel Tejada who was on third base following an RBI double and a sacrifice bunt.

“That run made a difference,” Lannan said. “It was a heads up play. He caught them sleeping.”

The Phillies bullpen, which allowed a deluge of runs in the home-opener, had a quality outing. Both Mike Adams and Antonio Bastardo combined to allow just one hit in the game’s final two innings.

“It’s good because when you have a game like that in the ninth inning because you have to keep the game close,” Bastardo said. “That’s what I was trying to do. I was trying keep the game the same as when I walked in and when I walk out. We want to give our hitters a chance to score runs to win the game. That’s my goal.”

The Royals scored two runs in their half of the fifth inning on an RBI ground out by Tejada that scored center fielder Lorenzo Cain and an RBI single by Alex Gordon that plated Jeff Francoeur. The Phillies  cut the lead to 2-1 on an RBI single by Ben Revere that brought home John Mayberry Jr.