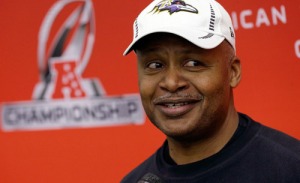 Ravens offensive coordinator Jim Caldwell is the mastermind behind Baltimore’s offensive resurgence in the playoffs.

For the Chris Murray and the Philadelphia Sunday Sun

To the NFL owners and general managers who passed on qualified African-American coaches during this last round of coaching vacancies, I hope you guys have been paying close attention to the Baltimore Ravens run to the Super Bowl.

Or better yet, go back through the various archives and look at the job that Ravens offensive coordinator Jim Caldwell has been doing over the last four weeks.  You can also look at his track record as a head coach. Isn’t he the same guy who guided the Indianapolis Colts to the Super Bowl as a head coach?

Then ask yourselves if you can explain to people why a guy like Caldwell is not hired for a head coaching position where guys who’ve never coached in the NFL can get head coaching jobs.  How come guys like Norv Turner, whose teams haven’t sniffed a Super Bowl, can get jobs easier than African-American assistant coaches who have done well as coordinators and head coaches.

Caldwell’s skills coaching the Ravens offense is the main reason why Baltimore is headed to New Orleans for Super Bowl XLVII.

The Ravens offense was struggling in early December and so the team fired former offensive coordinator Cam Cameron and promoted Caldwell, the team’s quarterback coach, to run the Baltimore offense.

Since the Ravens regular-season home loss to the Denver Broncos on Dec. 16, Caldwell has transformed Baltimore’s offense into a scoring juggernaut. They have averaged 452 yards of total offense and 31 points per game. In Cameron’s last nine games as the offensive coordinator, the Ravens averaged just 309 yards per game.

Caldwell was named the team’s permanent offensive coordinator on Monday.

“Like I’ve said before, he’s a really a solid football coach, first of all. He’s been around. He’s coached both sides of the ball,” said Ravens head coach John Harbaugh during his Monday press conference. “He’s been a head coach. He’s done it all. But, he’s mainly a really good guy. He’s a good person, and he’s genuine. He’s to the point [where] he doesn’t mince words, and he coaches football from the beginning of the day until the end of the day, and the guys appreciate that.”

The biggest beneficiary of Caldwell’s coaching prowess has been quarterback Joe Flacco, who has been playing like the second coming of the quarterbacks (Peyton Manning and Tom Brady) he has beaten in the last two weeks.  In the four games since losing to the Broncos, Flacco has thrown 10 touchdown passes, zero interceptions and has averaged 291 yards per game.

Flacco said he credits Caldwell’s guidance for helping him to become a better quarterback and giving him the opportunity to do more for the Ravens in the passing game.

“Our relationship has been great all year,” Flacco said. “It was awesome to have him in the room as a QB coach and have the talks and be around each other a lot, so you can have honest conversations and grow your relationship.

“He has been great. He is a great guy, so it has been easy to talk to him about certain things and make changes, make adjustments and things like that.”

With a proven track record as a head coach and what he’s done lately during this playoff run, you would think that we would be touting him as this hot assistant coach in line for a head coaching spot.

But then again did anyone think to look at New York Giants defensive coordinator Perry Fewell for a head coaching job. Didn’t he lead a defense that beat the New England Patriots in the Super Bowl last season? I guess he wasn’t qualified enough either.

Even with the Rooney Rule and Tony Dungy and Mike Tomlin leading teams to Super Bowl wins in the last seven years, it’s still the same old story for Black coaches in the NFL.

Apparently, some league owners are still uncomfortable with the idea of an African-American head coach guiding their franchises in spite of all the evidence of their success leading teams at the top spot and as coordinators.

When head coaching vacancies come open next year, what’s going to be the excuse for not hiring African-American assistants like Caldwell to head coaching spots? To tell you the truth, I don’t want to hear it.

The problem lies not with the Rooney Rule, but with team executives whose mindset is stuck somewhere in the 1950s.

One thought on “In Spite of Success, Black Coaches Still Snubbed for NFL Head Coaching Spots”