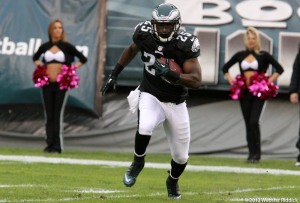 In Monday’s loss to the New Orleans Saints, LeSean McCoy gained 119 yards rushing on 19 carries and touched the ball just once during the Eagles five trips inside the red zone.

The problem for the Eagles in their 28-13 loss to the New Orleans Saints had little to do with swag, mojo or even their je ne sais quoi as much as they are need of an offensive line that can block people, the ability score in the red zone and a defense that can actually stop somebody.

When they start doing these things effectively and actually start winning games, the swagger might come back. For now the Eagles (3-5) have to face the reality that their season is in the midst of a free fall and quite frankly they are not a good enough football team, at this point, to recover from it.

For everyone who has been insisting the Eagles offensive woes are the sole fault of quarterback Michael Vick, you have Monday night’s game as evidence that the Birds issues are a lot deeper than their starting signal caller.

On offense, Vick was running for his life even before they lost right tackle Todd Herremans because of strained ligaments in his ankle. The former Virginia Tech star, playing behind a patchwork offensive line, was sacked seven times by one of the league’s worst defenses.

Oddly enough, the Eagles rolled up 447 yards of total offense, including 221 yards rushing. LeSean McCoy gained 119 yards by himself.  All those numbers are meaningless because the Birds were inside the New Orleans 20-yard line five times and ended up with just two field goals.

More importantly, they didn’t win the game, which renders those stats to be as useless a three-legged mule.

You can blame that on the goofy play-calling and also lack of execution in those situations. Two plays after Bryce Brown broke off a 40-yard run to get the Eagles to the Saints 6-yard line, Vick threw a pick-six on a pass that tipped off the hands of Brent Celek into the hands of Patrick Robinson who took it 99 yards for a touchdown.

On that play, you can argue there should have been a defensive holding or an illegal contact penalty called on the guy defending Celek, but the ball was in the receiver’s hands.  What bothers me about that particular sequence is why not run the ball, especially when they had been killing the Saints in the running game. For all of the Eagles trips to the redzone, McCoy had just one carry for minus-one yard and Brown carried it once for no gain.  Really? C’mon, man.

In the third quarter, the Eagles recover a fumble on the kickoff after Vick’s 77-yard touchdown pass DeSean Jackson brought the Eagles to 21-10. They eventually move the ball to inside the Saints 10. Given how hot the Eagles rushers had been you would think, they would have run the ball  at least once in that sequence.

But as usual, you saw an empty backfield set and New Orleans blitzed past the Eagles injury-riddled offensive line, forcing a sack and a couple of incomplete passes. The Eagles got the second of their two field goals and that was the last score of the night.

The Eagles last foray into to red zone resulted in a fumble at the seven-yard-line  by Celek. It was another opportunity to make it a game and the Birds blew it.

The defense complicated things on their end by not tackling and letting a team came into the game ranked 30th in rushing offense to run for 140 yards. The Eagles did get a sack and they got a turnover.

Meanwhile, Drew Brees was efficient enough to put the Eagles in a hole as he completing 21 of 27 passes for 239 yards and two touchdowns.

In these last two weeks, the Eagles haven’t given folks any reason to believe that they are going to recover from a snowball that is about to consume the Birds season. The Eagles are a terrible football team on both sides of the ball.

The offensive line can’t protect the quarterback and it has the coaches to the point to where they are reluctant to run the ball in the red zone. Meanwhile, the defense since the firing of Juan Castillo has been a joke and hasn’t come close to stopping anybody.

The good news for Eagles fans is that the 3-5 Dallas Cowboys and the 3-6 Washington Redskins are on the schedule. But don’t even think about the playoffs (Jim Mora’s voice), the Eagles need to be happy to win a game, any game, another game.