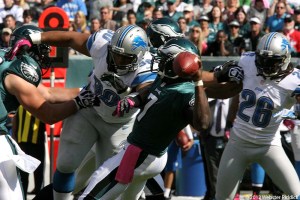 Although Michael Vick needs to cut down his turnovers, his offensive line has to do a better job of protecting him.

After losing two straight games in heartbreaking fashion, the Philadelphia Eagles come off the bye week into the fire of a must-win game against the unbeaten Atlanta Falcons Sunday (1:00 p.m.) at Lincoln Financial Field.

“It’s a big game for us,” said Eagles quarterback Michael Vick. “The last two games, we were in position to win the games and we didn’t close it out.  We’ve got to put it all together as a team and the teams that do that are the teams that are sitting on top right now.”

While the Eagles are unbeaten (13-0) after a bye week during head coach Andy Reid’s tenure as head coach, they will be facing an explosive Falcons team that averages 28.5 points per game. Quarterback Matt Ryan is the NFC’s third-rated passer and has weapons at his disposal like running back Michael Turner, who gained 114 yards against Birds in last year’s game in Atlanta.

Meanwhile, the Eagles are coming off a tumultuous week in which they fired their defensive coordinator Juan Castillo and put everyone on notice that their jobs are not safe.  At 3-3, the Eagles are fighting to save their season.

“It’s not the offense or the defense, it’s everybody doing their job better,” Reid said Wednesday during his weekly press conference. “You know the obvious. You can’t have the turnovers and you can’t have the big plays and you’ve got to have field position in order to win the game.”

On offense, the Eagles have to figure out a way to protect Vick. The Eagles will be getting left tackle King Dunlap back from injury. The good news for the Eagles line on the injury front is that they could be getting Pro Bowl left tackle Jason Peters back in about three weeks.

Peters has been on the reserve non-football injured last since August after rupturing his Achilles tendon. Reid said Peters has been moving around and is making progress.

Nnamdi Asomugha intercepts Matthew Sfafford in the end zone for a rare forced turnover by the defense. The Eagles are hoping to get more turnovers in Sunday’s game against the Atlanta Falcons.

The next biggest subject of scrutiny during this bye week was whether or not Vick was going to lose his starting job because of his 13 turnovers. While some of those miscues aren’t his fault, Vick told reporters that it’s just a matter of him protecting the football.

“It’s not hard, It’s not a science to it, just protect the football at all times,” Vick said. “Despite the circumstances, I still sit back there and try to make the plays that I know I can make and that’s just me and my confidence in myself and confidence in the guys.”

And speaking of confidence, Reid said he still trusts Vick to get the job done. He said that his quarterback has gotten better at recognizing and beating blitzes, something he’s had some trouble with earlier in the season. This week, Falcons defensive coordinator Mike Nolan will dial up a number of different blitzes to stop Vick and the Eagles offense.

“He’s done fairly well against the blitz, he’s been sharp there,” Reid said. “You saw that against Detroit and you saw it against Pittsburgh who throws a lot of things at you. It’s different scheme than (Atlanta), but he’s done a respectable job in that area.”

For all of Vick’s turnovers, the good thing for the Eagles is that Vick has been responsible for the Eagles three wins and has put them in position to win two more.

With new defensive coordinator Todd Bowles at the helm, the defense, which hasn’t had a sack in the last three weeks, is looking to redeem itself after coming up in the short in the fourth quarter of the last two games.

“The main thing is we have to finish,” said rookie defensive tackle Fletcher Cox. “That’s the biggest thing. This week we’re going to come out and just play hard, but at the end of the day, we just have to finish.”