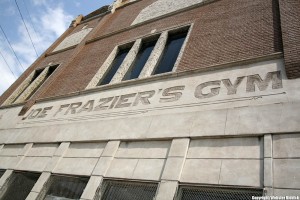 Along with Temple students, the National Trust for Historic Preservation is hoping to turn Joe Frazier’s Gym into a historic site. Photo by Webster Riddick.

If you’re a native North Philadelphian or even just a boxing fan riding up North Broad Street and West Glenwood Avenue and you see a furniture story with a myriad of “50% off Mattress” and “Free Lay Away” signs underneath of what used to be Joe Frazier’s Gym, it doesn’t seem quite right.

It was once the training headquarters for one of the greatest heavyweight boxing champions of all time. It also served as a safe haven that transformed the lives of young Black men and women living in a neighborhood surrounded by crime and drugs.

“Joe and (his son) Marvis helped turned some of these young men from the streets of North Philadelphia into people who have had the opportunity to grow and develop and become vital in the community,” said Vernoca Michael, a Frazier family friend and the owner of the soon-to-be sold Legendary Blue Horizon.

But like his relentless spirit in the ring, the sign, “Joe Frazier’s Gym,” towers above Broad Street as a reminder that “Smokin’ Joe” was an icon that truly represents the gritty, hardworking blue collar spirit of a city unafraid to wear its heart on its sleeves. 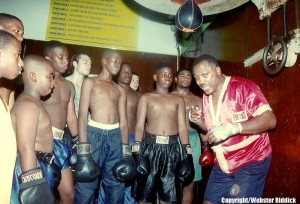 Dinh, who is one of the students leading the project to save the gym, said buildings like Joe Frazier’s Gym are an important part of Philadelphia’s culture and and history.

“They hold history and stories in those walls and we have to maintain those stories for future generations and let those stories be heard,” Dinh said. “We, as a younger generation, have to keep Joe Frazier’s legacy and keep his commitment to the community alive.”

Frazier had trained at the gym back in the late 1960s and it was turned over to him by his management group when he retired from boxing back in 1976.  Frazier lost the gym in 2008 because of back taxes.

Recently, Temple University had a film screening for a documentary that not only chronicled Frazier’s boxing career, but also took an in depth look at the former heavyweight champion’s relationship with his son, the local residents of the community surrounding the gym.

The film entitled, “Joe Frazier: When the Smoke Clears,” was directed by Mike Todd. It was shown at Temple’s Reel Theatre last Tuesday along with a panel discussion afterward to raise community awareness of the efforts to save the gym. The film can currently be seen on Hulu.com.

“I feel that this film has a level of importance in preserving Joe Frazier’s legacy, especially the gym to give you a visual image of what the gym once was,” said Quenell Jones, the film’s director of photography. “Hopefully, the students here at Temple University along with the teachers can continue to push that envelope to preserve (Frazier’s) legacy. This film shows how much of a community advocate Joe Frazier was.”

The key to making sure the gym is ultimately preserved as a historic landmark will be to find a suitable buyer. Playdon said the obstacle here is that whoever buys the place has to maintain the leases of the business currently occupying the building.

“The problem is that the leases that are given to these furniture people are sort of unfavorable to buyers, who shy off because they will say, it’s not a favorable investment if they have to inherit the leases,” Playdon said.

The first thing that needs to be done it is to designate the gym as a local landmark, said Brent Leggs, field representative for the Northeast office of the National Trust for Historic Preservation.

Leggs said the National Trust for Historic Preservation also wants to list the gym in the National Register of Historic Places. He said listing it here could make the gym attractive for future investors.

“Listing it in the national register provides an economic incentive which a future developer can use to reduce their construction costs in reserving the project,” Leggs said.

Leggs said the NTHP is not trying to buy the building itself, but they are hoping they can use their marketing power and brand recognition to attract a buyer who is interested in preserving the building.

“We can help them in determining what the future use may be- a public use that has a community purpose and benefit,” Leggs said.

Michael said it’s going to take partnerships between the public sector and private sector and the sheer determination of the community to help save historic buildings like Joe Frazier’s Gym and the Blue Horizon.

“We’re going to have to take that same oomph, that same determination, that same ability and turning into making sure we save this history,” Michael said. “A lot of that history will be transformed into young people looking at what has gone before and how others made it and inspire them to make it. We must continue this history for the sake of our young people.”