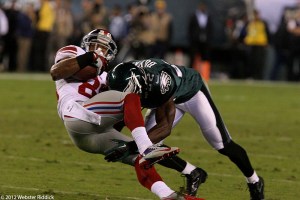 The Eagles have managed to compile a 3-1 record at the first quarter of the season despite the offense’s issues with turnovers.

The reason the Birds have toughed out the three close games that they’ve won is because the defense has kept them in the game. At this time last season, the defense was everybody’s favorite whipping boy last season for losing leads late in the game.

This season, the Eagles rank 6th in the NFL in total defense, but rank 21st in sacks with just seven coming into Sunday’s game against the Pittsburgh Steelers at Heinz Field in Pittsburgh. The Birds are also tied for 10th in scoring defense (20.8).

At this point, the Eagles defense isn’t necessarily evoking memories of the Reggie White days or the 1985 Bears or the 2000 Ravens, but they’re playing well enough to help the Eagles win. Defensive tackle Cullen Jenkins said it’s all about the belief that they can be one of the NFL’s top defenses, especially after struggling throughout much of the season in 2011.

“It’s all about being accountable and having the mindset that we’re not going to come out and be the weak link of the team this year,” said Jenkins. “It’s a different attitude. We’re striving to be the best defense in the league. We’re not worried about just doing okay, we want to go out there and be the best.”

Of course, the challenge for the Eagles defense this week will be to figure out a way stop Ben Roethlisberger and running back Rashard Mendenhall, who is returning to the Steelers lineup after being out for the first four weeks of the season with a torn anterior cruciate ligament in his right knee.

The Eagles will be facing a Pittsburgh squad that ranks 18th in total offense, but No. 1 in third-down conversions. Getting off the field will be a huge key for the Bird defense against the Steelers.  Defensive coordinator Juan Castillo said Pittsburgh’s offense might be the best they’ve faced so far this season

“They’re very talented, they’re very confident, [and] the quarterback, Ben, is playing with a lot of confidence,” Castillo said. “The thing we have to take care of, and I think we saw it the first series [in the preseason], he was able to extend plays. We had a third-and-nine and third-and-11 and he broke out of the pocket and was able to extend plays and was able to throw the ball. One he got it down and it was fourth-and-one and the other one made the first down. That’s what we have to be able to take care of.”

At the end of 2011 lockout, the Eagles acquired Jenkins from the then-Super Bowl champion Green Bay Packers along with defensive backs Nnamdi Asomugha and Dominique Rogers-Cromartie, Birds fans thought they had a Super Bowl-caliber defense.

Without having organized team activities to establish team chemistry and learning Castillo’s wide-nine scheme, the defense became best known for blowing fourth quarter leads and getting gashed on both sides of the ball. The Birds defense became the joke of the league as their plans for the Super Bowl deteriorated into a mediocre 8-8 record and out of the playoffs.

But this season the Eagles defense has been doing well without a lot of fanfare and their efforts have been overshadowed by the foibles of the offense. The defense has yet to allow an offense to score more than 23 points in a game. In the 27-6 loss to the Arizona Cardinals, a touchdown came as a result of a turnover by the offense that was turned into a touchdown.

“That’s the way you do it, you like flying under the radar,” Jenkins said. “I’d rather sneak up on people and surprise them. You saw what happened with the build up last year. That didn’t work for us. It always nice to have that fight in you first where you have to go out there and make it happen.”