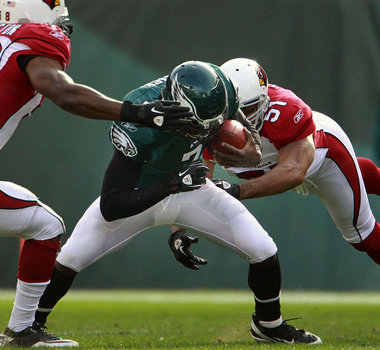 One of the questions that I tweeted and Facebooked out to fans was how much do they or even should they read into what was an awful performance by the Eagles first team offense and defense against the Pittsburgh Steelers in the first preseason game of the season.

As for my two and a half cents on this issue, I would say that it’s complicated to really say that this is a prelude to the upcoming season. In the millions of years I’ve been watching football since the late 1960s, I have seen teams stink on toast in the preseason and then go on to win Super Bowls or at the very least make the playoffs.

In the case of the Eagles, the days leading up to last Thursday’s game has been clouded by the sudden and tragic death of Andy Reid’s eldest son, Garrett.  You can’t get all uptight if Reid or his team’s collective mind wasn’t necessarily on super focus mode over what is ultimately a meaningless preseason game.

The Eagles ultimately won the game 24-23 on a last second 51-yard field goal by Alex Henery.  Considering how this week has gone for Reid’s family, it was good to see him smiling at the end of the game.

The death of the 29-year-old Garrett Reid was probably almost as hard for the team as it was for the Reid family. The young man was apparently popular with Eagles players. Because the team has genuine affection for their head coach, they were no doubt trying to be there for him at a tough time.

You can say that athletes have to be professional and be focused even in the face of tragedy.  But when you or someone you’re close to loses  a loved one like that,  to say they’re you’re not going to affected by such  a tragedy is simply not true.

All that said, the Eagles are still a work in progress on both sides of the ball. The Steelers certainly exposed that particular truth. The Eagles starting defensive unit looked like the squad that was getting gashed by opposing offenses last year and they looked like a team that forgot how to tackle in the open field.

“The blocking, the tacking and penalties on both sides of the ball, it just wasn’t good enough on both sides,” Reid said. “There’s a certain attitude that you have to bring to the table there and we have to get better at it.”

The Steelers offense started the game by holding the ball for 16 plays and 9:52 minutes before getting a field goal.

It was the Steelers second of the drive of the game that was an unpleasant reminder of the team’s struggles from last season.  Pittsburgh’s second-team offense drove 10 plays and 70 yards for the game’s first touchdown of the game.

There were three plays that had fans pressing the SMDH (shaking my damn head) keys on their favorite social networking. sites One of them included a stupid penalty by Dominique Rogers-Cromartie, who launched himself head first  into Steelers backup quarterback Byron Leftwich  on a third down that resulted in a 15-yard penalty.

Later in the drive,  the Steelers faced a third and 13 at the 50-yard line and wound up getting a 14-yard run by running back Chris Rainey , who powered his way through a defense that missed a couple tackles.

On the next play, Steelers running back Jonathan Dwyer ran another 33-yards through the Eagles defense.

Two plays later, Leftwich hits a wide-open Emmanuel Sanders for a two-yard touchdown in between Nnamdi Asomugha, who apparently had corner of the end zone and safety Jaiquawn Jarrett who was playing about seven or eight yards off Sanders.  Both players seemed confused about the coverage on that play.

The Eagles starting offense was equally as terrible.  In two possessions, they didn’t get any first downs and managed just -7 yards of total offense. Michael Vick was sacked and left the game with a thumb bruise. He  completed three-of-four passes for six yards.

Now they’re a lot of Eagles fans who are looking at his performance and  going into panic mode.  Stop!

For as bad as the starters were and they were terrible,  there’s still time to fix both sides of the ball at this point of the season. That’s why you can’t really can’t  put too much stock into the first preseason game.

If they ‘re playing  like this in September or mid-October, then you may have some reason to sound the alarm or push the panic button.