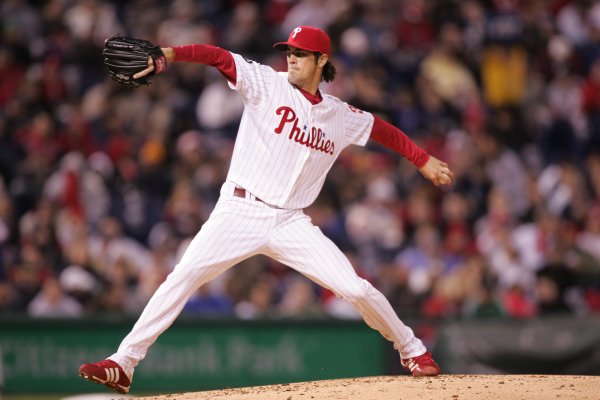 Hamels had a superb effort against Tampa, but his team came up short in the first game of Sunday’s day-night doubleheader.

Going against one of Major League’s best pitchers in Tampa’s David Price, Phillies starter Cole Hamels dazzled the Tampa Rays by allowing no runs and three hits. He left the game with a 1-0 lead and seven strikeouts, which tied for sixth place on the Phillies all-time strikeout list with Jim Bunting.

Unfortunately for Hamels it all went for naught as the bullpen for the second straight game failed to hang on to a lead and the Phillies wound up on the short of a 3-2 loss in game one of Sunday’s day-night double header.

Price, matched up with Hamels well, allowed just one run on four hits—a solo homerun by Jimmy Rollins in the sixth. He had also seven strikeouts in seven innings. He got the win.

“It’s the best I’ve felt in a couple of starts, so it was good,” Price said. “Cole is an all-star pitcher and he has been for a while. He did what he did and it was a good game.”

Phillies reliever Antonio Bastardo came into the game in the eighth inning and pitched himself into serious trouble. He walked Elliot Johnson, got Brooks Conrad on a flyoutto left, but then walked Rays centerfield B.J. Upton. First baseman Car

los capped off the Rays uprising by blasting a three-run shot to right to give Tampa Bay a 3-1 lead they would never relinquish.

When Manuel finally pulled Bastardo out of the game, he was showered with boos and cat calls by the fans at Citizens Bank Park, who were understandly frustrated with the bullpen spoiling another good effort by a Phillies starting pitcher.

After the game, Manuel was asked if should have brought Bastardo, who got the loss, into the game after he had struggled to throw 29 pitches in Saturday afternoon’s game,

Meanwhile, Hamels, who threw 111 pitches, did his part to help the Phillies come away with the win and wasn’t upset about Manuel pulling him out of the game after the seventh inning. The pitch count was definitely a factor.

“I’d love to start and finish a game, but there’s something said because it can get very hairy trying to do it for a whole season and how long you last in your career.,”Hamels said. “You have to be a lot more careful and dig a closer to keeping that pitch count throughout the whole game. You can’t have those big innings where you’re throwing 25 pitches because that’s going to hurt you.”

In the Phillies half of the eighth inning, they cut the lead to 3-2 on an RBI-single by Ty Wigginton that scored Hunter Pence, who singled to open the inning. With runners at the corners, the Phillies had two chances to score the tying run but came short. John Mayberry Jr. struck out looking at at a ball he should swung at and Michael Martinez, who was 0-for-4, flied out to right to end the inning.

The big question in that situation was whether Manuel should have lifted Martinez for a pinch hitter like left-handed hitting Mike Fontenot or even Juan Pierre who hits lefties well with lefthander Jake McGee was on the mound. That question got under Manuel’s skin when it was raised during the postgame press conference.

“You guys ought sit in the dugout with me and give me all the scenarios because I don’t think we know them,” Manuel said sarcastically. “We don’t know how to manage a game. I think you guys ought sit down with us or tweet us or something and float the information down there to me because I ain’t smart enough to get it.”