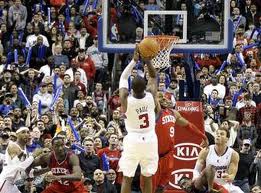 With Andre Iguodala all over him, Clippers guard Chris Paul hits the game-winning basket to beat Philly.

For the Sunday Sun and Chris Murray Report

Sixers head coach Doug Collins prides himself on being a teacher and relishes opportunities during the season to give his young players an opportunity to learn new plays as well as refreshing their minds on the fundamentals of the game.

In what has been the most difficult stretch of the season for his young team, Collins has had little time for chalk talk or rest  because the best classroom for his team during the last two weeks has been going up against the likes of LeBron James, Kobe Bryant, Dwight Howard Tony Parker.

“The most fun part of coaching  is teaching,” Collins said. “It’s being on the floor with our guys and walking through stuff and having practices, putting in a new play.  We haven’t been able to do that.”

And maybe that lack of practice time caught up to the Sixers in a heartbreaking 78-77 loss to the Los Angeles Clippers in front of a sell-out crowd of 20, 539  fans at the Wells Fargo Center Friday. It was the first time the Sixers have lost back-to-back games this season.

Clippers point-guard Chris Paul, with Sixers forward Andre Iguodala in his face, sank a 16-foot fade away jumper at the foul line with 3.2 seconds left put the Clippers ahead. Paul scored a game-high 24 points while Blake Griffin added 16 points.

“(Paul) does a good job of using his body,” Iguodala said of defending the game-winning shot. “He just got that extra inch, I almost blocked it actually. He did a good job of getting the shot off.”

On the Sixers final possession, Lou Williams couldn’t get off a final shot as he was surrounded by Paul and forward Kenyon Martin.  Collins put the team’s lack of execution on the game’s final play on his shoulders.

Added Williams: “I caught it and they trapped right away and when you got three seconds, you really can’t get a look at the rim.”

With tonight’s loss to the Clippers, the 76ers have won four of the seven games against teams with winning records and have built a solid 18-9 record and are currently the No. 3 seed in the NBA’s Eastern Conference. They have beaten the Los Angeles Lakers, the Orlando Magic, the Atlanta Hawks and the Chicago Bulls.

“We haven’t gotten killed just yet,” said Williams, who scored 11 points in the loss to the Clippers. “All of these games are learning experiences. One comes down to us trying to make a shot at the end of the game. One comes down to other teams making shots. Nobody’s manhandled us in our building and so obviously we learned something from that.”

In their losses to Miami Heat and San Antonio Spurs, the Sixers were gnawing at the heels of those teams for about three quarters. Both teams needed a big scoring spurt to finish the Sixers off. In the loss to the Clippers, it took an incredible shot by Paul to beat the Sixers. Collins said his team played well during this stretch, especially with center Spencer Hawes out with a left Achilles injury.

“I’m absolutely thrilled,” Collins said. “If you had told me that we would be sitting here at 18-9 with the way we’ve handled ourselves at home and the teams that we’ve had to play, the fact that like a lot of other teams we’ve been short-handed, especially along the front line.

“I’ve said before I thought that Tony Battie and Lavoy Allen came in and rescued us and saved us a couple of home games.”

Iguodala said he thinks the Sixers have become a mentally tougher team over the last seven games.

“It usually runs with you, it carries over for a week or two,” said Igoudala. “Hopefully, it continues with the high level we’ve been playing because we’ve been getting wins against these good teams. I think that part of the stretch is over. Now it’s time for us to continuing playing high level basketball and get wins.”

The Sixers will embark on a three-game road trip, starting Saturday, that will take them to Cleveland, Charlotte (Monday, Feb. 13) and Orlando (Wednesday, Feb. 15). They will be back at the Wells Fargo Center for a game against the defending NBA champion Dallas Mavericks.

“It was a good week for us, all is not lost, but it would be good to get away and have a change of scenery,” Williams said. “We’ve always played well on the road and so we’ll see what happens.”