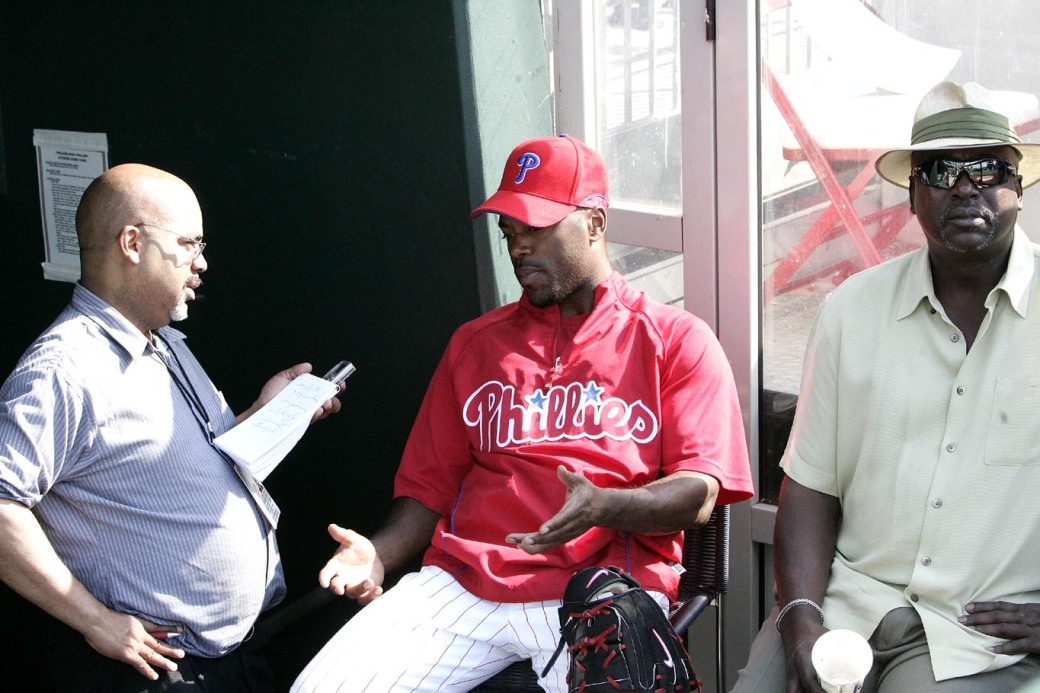 Jimmy Rollins hopes to be back with Phillies in 2012. Photo by Webster Riddick.

For the Sunday Sun

It will be hard to imagine the Phillies without Jimmy Rollins in red-pin stripes patrolling shortstop at Citizen’s Bank Park.

That’s something that Rollins himself can barely come to grips with that concept.

“I think I’ve worn it pretty well over the years,” Rollins said. “I haven’t really thought about putting on any other color other than red and white pin stripes.”

As much fans would like their superstars to stay with their teams until they retire, the lure of more money from free agency is a harsh reality of today’s sports climate. J-Roll, for all he has meant to the resurgence of the Phillies, understands this all too well, but he is hopeful things will work out with the Phils.

“At the same time, gut feelings don’t always make great business decisions,” Rollins said during his press conference with reporters back on Oct 11. “It is a business, regardless of how you feel or what you want. Things have to be worked out and agreed upon. I really see there’s a good chance things will work out.”

With his 33rd birthday coming up, Rollins is seeking a five-year deal with a contending team preferably the Phillies. Listening to him during his last confab with the Philadelphia media, you do get the impression that he likes being here and wants to stay here. But most local baseball observers are doubting that he will get the five years he is seeking and they might be right.

Phillies general manager Ruben Amaro Jr. said he would like to see Rollins in a Phillies uniform for several years, but refused to talk about whether the amount of years that Rollins wants for a new contract..

“I think Jimmy knows exactly where we stand as far as whether we want him back or not, there’s no question that we want Jimmy to be back in our uniform and play shortstop for the next several years,” Amaro said. “Whether that happens, depends upon whether or not we get to the finished line.”

There are some local pundits and some fans who are hoping the Phillies sign New York Mets free agent shortstop Jose Reyes, who won the National League batting title with a .337 average and stole 39 bases during the 2011 season.

Yes, Reyes is younger and had better stats last season than Rollins and on the surface, it would appear to be a good move to sign a younger, faster player.

The problem with Reyes over the years is that he has been injury prone and he has several bouts of being erratic in the field. In the final game of the season, Reyes focusing on individual goals took himself out of the game to help him preserve his National League batting crown rather than help his team win.

When it comes to intangibles like leadership in the locker room, Reyes doesn’t even come close to being the leader that Rollins has been during the Phillies run through the playoffs and the World Series.

On the other hand, Rollins hasn’t been the same player since his MVP season in 2007. Injuries have slowed him down. As a hitter, Rollins has become a bit too enamored with trying to be a home run hitter from the lead-off position like his hometown hero Rickey Henderson.

But for all the criticism that Rollins gets, some of it deserved and some of it is absurd, he is still one of the game’s best defensive shortstops. Last season, Rollins committed just seven errors and had a .988 fielding percentage.

It is unlikely that Rollins is going to get the five years he is seeking, given his health and the fact that he is getting up there in age. But because it looks like both Rollins and Phillies management want to somehow work this out, the two parties will probably meet each other half way.

In other words, if he does stay in Philly, he will be probably get a three or four-year deal with options and lots of money.