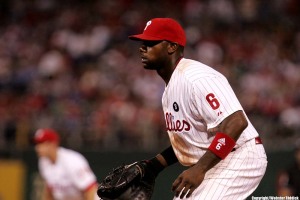 Ryan Howard and the Phillies hope to get their mojo back for their postseason run. Photo by Webster Riddick.

If the Phillies win the World Series next month, we will probably look upon this current five-game losing streak, the longest home losing streak of the season, and laugh at the idea that it didn’t mean anything.

But you have to wonder if clinching the division with 15 games left in the regular-season will take away any intensity from this team coming into the playoffs. Can they turn it on in October?

Y’all know what happened last year when this team ran into a hot San Francisco Giants team. The road to postseason ruin is paved with great teams like the 1969 Baltimore Orioles, the 1988 Oakland A’s and several others along the way that saw no parts of a World Series crown even though they had the best record in the game. It’s the hottest team coming into the playoffs that walks away with the trophy.

With the way this team hasn’t been hitting over the last five games, it does make you wonder if they can get their mojo back. In Wednesday’s 7-5 loss to the Washington Nationals, the first four batters in the Phillies lineup-Jimmy Rollins, Shane Victorino, Placido Polanco, and Chase Utley- finished 0-for-16 with two walks.

Granted, the Phillies were without Ryan Howard and Hunter Pence. Playing 33 games in 31 days has also taken its toll on the team as well. But Phillies Charlie Manuel has not been particularly happy with his team’s lackluster performance by any stretch of the imagination.

During the postgame press conference, I asked Charlie Manuel if it was better that this streak of losses was happening now than say next at some point next month. Of course, Manuel got a good chuckle out of it.

“I think if this was happening in October, I’d be packing my car,” Manuel said with a smile. “It’s not October, it’s an everyday game.”

But then Manuel got serious and talked about the importance of his team getting it going again for the remainder of the regular season and generating some mom. Through his tongue and cheek with reporters, Manuel you can’t throw off the switch and expect it to come back miraculously—not even a veteran playoff team like his can afford that luxury.

“You can’t ever think that you’re going to turn it on and off like you’re going to cruise and do what you want to do,” Manuel said. “Nahhh, I don’t work that way it all and that’s why you have to stay with it. It’s a repitition game over and over and you come and you work everyday.”

“When he comes back he has to have some at-bats,” Manuel said. “The timing comes from the game. The greatest experience you can get is in the game and that’s where you get your timing.”

In the Phillies clubhouse, shortstop Jimmy Rollins in a rare confab with reporters said this five-game losing streak might be the reality check that they need to get themselves going again.

“You can put it that way,” Rollins said. “We know what’s going, I don’t think we needed to lose five games to feel that we need to kick it back in. Sometimes, it just doesn’t happen and like I said when you get to a place that brings a different excitement and going into the lion’s den and you’re force to come together as a team and stand up for each other.”

The Phillies will end the regular season on the road against the New York Mets and the Atlanta Braves, who will be fighting for a wildcard spot.

“It helps when another team is coming to get you, you find a way to turn it up,” Rollins said.