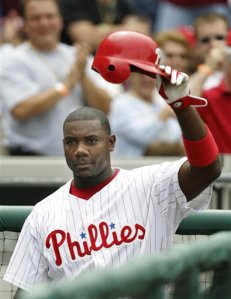 For the fifth straight year, the Phillies will raise another blue flag symbolizing their conquest of another National League East Title.

With their 4-2 loss in 11 innings to the St. Louis Cardinals Friday night in front of another sellout crowd at Citizen’s Bank Park, the Phillies magic number to clinch the East is down to just one, coupled with the Atlanta Braves loss to the New York Mets.

The game itself was a microcosm of the season, the Phillies struggled to hit the ball, but yet were in position at the end to win it in the end because of their ability to battle back. They finished the game with just seven hits.

“Tonight and the last three games in Houston and the double header (Thursday) we didn’t have a lot of hits on the board, but we will,” said Phillies manager Charlie Manuel. “We had some chances, but we couldn’t get it done. We’re going to clinch. I like our position.”

“You’re going to celebrate because anytime you win a division that’s the start of something special,” said Phillies centerfielder Shane Victorino. “That’s because you’re in the playoff process.”

Capturing the National League East flag is just the first step to what the Phillies hope will be their second World Series title in four years. With the best record in baseball and the most formidable starting pitching rotation in the majors, it is World Series or bust.

Yes, the Phillies will enjoy a little bit of the bubbly to play along with the custom of clinching a division, but anything less than a world championship will be considered a major disappointment to both the fans and the players.

Ever since the Phils were eliminated by the San Francisco Giants last season, every move that general manager Ruben Amaro Jr. has made from signing Cliff Lee to pulling off the trade for Hunter Pence back in July has been about putting the Phillies in position to win a World Series.

Considering that the Phillies have pulled off having the best record in baseball despite a plethora of injuries and several leaves of abscences by their offense at various times throughout the season, you would think that they should be a cinch to bring home the title and another parade down Broad Street.

But then again that’s what Phillies fans said last season when the Phillies came into the 2010 postseason armed with the best record in baseball. Then they ran into the buzzsaw known as the San Francisco Giants, a team that eventually won the World Series and the Phillies season came to an abrupt end with the lasting image of Ryan Howard looking at a called third strike for the last out of game six of the National League Championship Series.

With the regular season winding down and the division title within their grasp, the Phillies are just hoping to get their starting lineup healthy just in time for their play run in October.

“We need to get everybody out there from one to eight getting a lineup that (Manuel) wants to get out there every night,” Victorino said. “Getting us in position to win it sooner than later, so (Manuel) can give us a blow or whatever he wants to do and then get in a position as a starting eight and get on a roll and go.”

One of the players that the Phils need to get healthy is Howard, who has 33 homeruns and 113 runs batted in. He has been battling with bursitis in his heel.

The one thing that has been consistent about the Phillies this year has been their starting pitching with Roy Halladay (18-5, 2.34 earned run average) and Cliff Lee (16-7 ,2.38 ERA). Those two have been lights out and will definitely keep the Phillies in games when the offense is struggling. Cole Hamels (14-7, 2.71 ERA) is another guy no one wants to face in the postseason.

While Roy Oswalt (7-9, 3.88 ERA) has been strugglig with injuries, rookie Vance Worley has done a remarkable job for Phillies with an 11-2 record and 2.85.

If the Phillies offense can get hot during this postseason, they can beat anybody in a short series.The Phils starting rotation will do enough to keep them in games and not the score get out of hand. But at the end of the day, the offense has to get hot for them to bring home a World Series title.