For the Sunday Sun and the Chris Murray Report 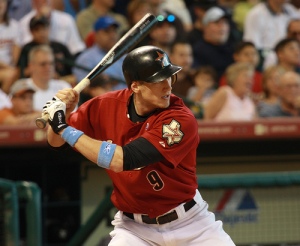 Having the best record in the National League or even in baseball is not good enough for the Phillies, they have been there and done that.

Barring a collapse of 1964-like proportions, the Phillies are going to probably win the National League East for the fifth straight year. But having the best record is no guarantee of a World Series title.

The problem for the Phillies in their last two losses in the postseason has been their lack of offensive production. In the 2010 National League Championship Series, they batted .216 against the San Francisco Giants and in the 2009 World Series, the Philllies batted .227 against the New York Yankees.

“Put it like this when we’re hitting like .220, .230, .240 from a hitting standpoint, that’s not good ,” said Phillies manager Charlie Manuel. “I don’t care what anybody says that ain’t good. We should be trying to improve and get better. If it’s with the players that we’ve got, they should be trying to get better, if that makes sense.”

With the July 31st trade deadline staring them in the face, they are in the market for a right-handed bat. If you’ve learned anything from the last two years under general manager Ruben Amaro’s leadership, the Phillies are a team that’s not afraid of making a move to improve the ball club.

Last season, when the team needed another right-handed arm, you got Roy Oswalt. During the off-season, the Phillies pulled off the deal for Cliff Lee and they did the same thing with Lee in 2009 when they got him from Cleveland.

While most folks around baseball would love to have the Philllies 64-36 record , manager Charlie Manuel believes his current team still has room for improvement. Even though they came into this week’s slate of games, the Phillies have managed to win nine straight series and haven’t lost two in a row since June 4th. The one thing that has to bother Manuel about his team is that lack of offensive consistency that has slowed his team down at various times this season.

Among all the speculation, Houston Astros outfielder Hunter Pence and Mets outfielder Carlos Beltran have bantied about as players the Phillies could pick up to improve their postseason chances. The 28-year-old Pence is having a pretty good season with a .308 batting average with 11 homeruns and 62 runs batted in.

Then there’s Beltran, who will be a free agent at the end of the year. The switch-hitting centerfielder is currently has a .291 batting average with 15 homeruns and 64 runs batted in. He would be a rental player at best and would definitely be good against left-handed pitching.

According to most of the rumors I’ve heard, the Philllies are working feverishly to put together a deal for Pence, who is under contract for at least two more years before his arbitration year  and is getting over $ 6 million per year. The Phillies will no doubt have to put together some hot prospects on the table to pull this off.

Some folks I’ve talked to around town say they are willing to see the Phillies put rookies sensation pitcher Vance Worley on the block for Pence or Beltran.

I’ve never liked the idea of teams mortgaging their future just to win now. Yes, teams like the New York Yankees and the Boston Red Sox have doing it for years because of their deep pockets and I know Phillies fans want to see another parade down Broad Street.

Personally, I wouldn’t put Worley in the conversation because I think the kid has the potential to be the Phillies next good pitcher. But if I had to put Worley on the block, I would not do it for Beltran, who is 34-years-old and near the end of the line. At best, he’s a rental player.

If you put a gun to my head and said trade Worley for a right-handed bat, I would take Pence over Beltran because he’s young enough to give a few years. If I’m going to trade a hot rookie like Worley, I want to get something for it down the line.

To be honest about it, Amaro values pitching too much as a general manager and I don’t think he would put Worley on the trading block, but you never know. But one thing is for certain, the Philllies are going to make a move at trade deadline.

“Teams that win and do it consistently, they do those things and that’s a big part of being here,” Phillies starting pitcher Roy Halladay said. “It was always frustrating watching New York and Boston do it whenever we (Toronto Blue Jays) get close around the break. It’s nice to be on a team that goes out and gets those guys whether its during the winter or at the break whatever. You know they’re always trying to make us better.”