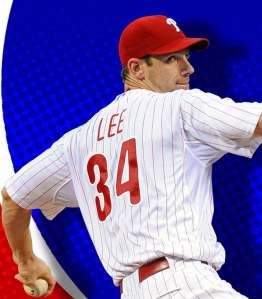 Lee has a career-high three RBI against the Reds

Cliff Lee didn’t necessarily have the greatest outing in the world for a starting pitcher of his caliber. In eight innings, the Phillies lefty gave up four runs on 10 hits with one walk and eight strikeouts.

To make up for a rather ordinary pitching performance by his lofty standards, Lee was outstanding at the plate. He was 2-for-4 with a career-high three runs batted in the Phillies 10-4 win over the Cincinnati Reds Wednesday afternoon at Citizens Bank Park before a sellout crowd 45, 650 fans.

After a lackluster start to this homestand, the Phillies win their second straight series win before going into their nine-game road trip to New York, Washington, and Pittsburgh.

Nearly 12 hours after infielder Wilson Valdez was the winning pitcher in Wednesday night’s/Thursday morning 19-inning marathon, Lee’s bases-loaded ground-rule RBI double helped to break a 4-4 in the sixth inning tie put the Phillies on top of the Reds for good. For good measure, Lee had a stolen base and a run-scoring single.

“He likes to hit and he wants to be a good hitter,” Phillies manager Charlie Manuel said. “When he gets in batting practice, he wants to see how far he can hit the ball. He takes a very aggressive cut in the game. Once he learns to stay on breaking balls and changeups a little bit more, he might become a real good hitter.”

Lee’s eight-inning stint on the mound gave the Phillies bullpen a much needed rest after it was exhausted the previous night. He threw 114 pitches  during his time on the mound. Jose Contreras, who was in his first outing since coming off the disabled list, pitched the ninth inning for the Phillies.

“I knew that I needed to get deep into the game and help out the bullpen,” Lee said. “A lot of guys threw a lot more than they’re used to.”

Within a short span of time after a position player has a performance for the ages on the mound, a pitcher comes up with the big hit to break open a tie ball game. That’s probably an event that only happens when the stars are aligned a certain way in the galaxy. The experience of Valdez and Lee in the last half day or so is further evidence of why baseball can be such a goofy game.

“This is fun, this game is crazy,” said Phillies first baseman Ryan Howard, whose RBI double gave the Phils a 1-0 lead in the first inning. “You never know what you’re going to see. For Wilson to do what he did last night and for Cliff to do what he did today, stealing bases. It’s full of surprises.”

With the short turnaround from a night game to an afternoon contest, the Phillies jumped on the Reds early with Howard’s run-scoroing double in the first inning. The Phillies upped their margin to 4-0 with a three-run home run by Raul Ibanez in the bottom the third inning.

But the Reds would gradually creep back into the game. In the fourth innning, shortstop Paul Janish drove in a pair of runs that cut the lead to 4-2.

In the sixth ining, Reds rightfielder Jay Bruce, who has been destroying Phillies thorughout this series, came up with another clutch base hit to drive in a pair of run tie the game at 4-4. Thursday, he blasted a two-run homer. For the last three games, Bruce has come up with the big hit off Phillies that tied or won the game for the Reds.

The game remained a tie until Lee’s heroics with his bat in the sixth inning. Lee hit a ball to deep right center field that appeared to heading out of the park for a home run, but the ball sailed over the head of Reds centerfielder Drew Stubbs and bounced onto the warning track and into the bushes for a ground-ruled double.

“It was a first-pitch fast ball. I was looking for something that I could put a good swing on and that was it,” Lee said. “It was a ground-rule double. I was hoping it wouldn’t bounce over the fence because it cost us a run. It was a tie game, we extended the lead and we busted it right open.

With all the accolades being showered upon Lee for his offensive performance, Phillies second baseman Chase Utley hit his first homerun of the 2011 season in the eighth inning to complete the scoring. Though he was just 2-for-14 in his first series of the season. His mere presence back in the Phillies starting lineup seems to have the offense a spark in this series. They scored in double digits in runs in two of the four games in this series.

“It’s always good to get Chase back in the lineup and it does provide some energy, just his presence,” Howard said. “He’s kind of like a spark plug that gets out there and he goes hard, so to be able to have that back into this lineup, I think it gives an extra spark of life.”