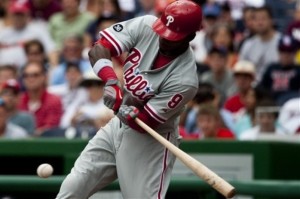 For the Chris Murray Report and the Sunday Sun

After spending the first month of the season at Triple A Lehigh-Valley, Phillies outfielder Domonic Brown is back with the big league ball club, looking to provide a much-needed spark for an anemic Phillies offensive attack that’s had trouble scoring runs.

Brown was able to come back to the Phillies after centerfielder Shane Victorino went on the 15-day disabled list and because he tearing up minor league pitching at Lehigh Valley. He batted .341 with 10 runs batted in and two home runs. He also had a .537 slugging percentage and a .437 on-base percentage.

While was Phillies management was initially worried about to bring him up too soon, but with Victorino injured, Brown re-joined the parent ball club last Friday. The main challenge that Brown faces is just getting time on the field and finding his comfort zone as a hitter.

Brown got his first RBI of the season on a sacrifice fly in the bottom of the second inning in Tuesday’s 6-3 loss to  the Cincinnati Reds. In the Phillies 10-3 win over the Reds he was 1-for-4 with a double.In the Phillies 2-0 shutout of the Texas Rangers last Saturday, Brown was 0-for-4.

“It’s about being patient and getting good pitches to hit,” Brown said. “(Saturday) night I wasn’t doing that. First game back, I was a little antsy here and there, but it’s going to take time. I’m going to get comfortable in the box and good things are going to happen.”

For the last year, the 23-year-old Brown has accumulated a number of accolades since being picked in the 20th round of June 2006 draft as a high school player out of Redan High School in Stone Mountain, Ga.  In 2009, the magazine, “Baseball America” named him the top prospect in the Phillies minor league system.

Last season, Brown started out the season at Double-A Reading and had a .381 batting average over an 11-game stretch until he was promoted to Lehigh Valley. On July 28, Brown got moved up to the Phillies. He was a recipient of the Paul Owens Award as the best minor league player in the Phillies farm system.

The 6-foot-5, Brown came into this season with the potential of being the next big star for the Phillies, especially with the departure of Jayson Werth. But there were a few setbacks along the way. In spring training, he went through a tremendous slump, going 0-for-15 and

sustained an injury to his wrist and was out for 4-6 weeks. He got his first hit of the spring the day he got injured.

“I think a few days before the injury happpened, Brown was back to being the way he was when I was around him at Lehigh,” said Phillies hitting coach Greg Gross. “I think he was in a good frame of mind three or four days leading to him getting hurt, so I think he would have been throughout the rest of spring training.”

Gross said Brown has good hand and eye coordination and has fared well against some good competition in the minor leagues including hard-throwing Reds left-hander Aroldis Chapman, whose fastball has  been clocked at over 100 miles per hour.

“I’ve seen him against some very good pitching, I saw him hit with two strikes and I saw him hit off of Chapman in Louisville,” Gross said. “When you see him against that type of competition with good at-bats, you can only think that confidence wise it should help you a lot to be able to handle that stuff and it shows what kind of potential he has.”

“I haven’t really seen that many lefties here at all,” Brown said. “I hit lefties well in

the minor leagues, but up here it’s a totally different story and that’s why they’re trying to work me in slowly.”

Brown said it was tough when he first came up here last year because he wasn’t used to coming off the bench as a pinch hitter, but this season as a starter against right-handed pitching.

“I’m back to my normal routine and back to doing the things that I do. It’s just going to take time and I’m not going to put any pressure on myself or anything like that. I’m just going out and having fun,” Brown said.

The tall, lanky Brown has the potential to be a five-tool player with his speed on the base paths and in the field. He has a strong arm capable of gunning down runners from right field. He said defense and hitting are his favorite aspects of the game.

“I take pride in my defense and I like to throw guys out, but the best thing I like is hitting,” Brown said. “When I step into the box, it’s game on. I really don’t care who’s on the mound or what your name is, I just want to hit the ball.”