By Chris Murray
For the Chris Murray Report
If you were expecting another complete game by a Phillies starting pitcher, you were sadly disappointed.
In the Phillies 4-3 loss to the Florida Marlins Friday night, Roy Oswalt pitched just 6 innings, threw 89 pitches and allowed two runs on four hits before leaving the game with back spasms. He left the game with a 3-2 lead before the Phillies bullpen allowed the Marlins to score the two runs in the seventh to give them the victory.
In a world of middle relievers, set-up specialists, individual matchups with hitters, and closers, what Roy Halladay and Cliff Lee did this week in pitching back-to-back complete games is a rarity and an exception to the rule. In fact, the idea of pitchers completing games is almost as antiquated a notion in baseball as hitters not wearing batting helmets.
When I first started watching baseball back in the 1970s (to let you know how old I am), your ace starting pitcher was expected to go the whole nine innings. Today, if your starter goes six innings and throws about 100 pitches it’s considered a quality start.
Can you imagine some manager walking up to Bob Gibson or Nolan Ryan telling them they have to give up the ball after 100 pitches in a game that they’re leading 5-2 or 4-3 in the sixth inning with about 12 strikeouts? Phillies manager Charlie Manuel said it’s a different g 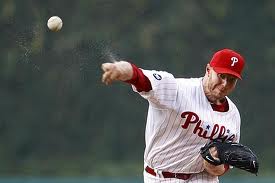 Roy Halladay pitched a complete game against the Washington Nationals

ame today.
“Baseball has changed in the aspect of what’s a quality start,” Manuel asked rhetorically. “What is a starter in his mindset. If he gets to a 100 pitches, he’s already thinking that he’s near the point where he’s already tired. It seems that way to me.
“If a pitcher has a mentality that he’s going to throw nine innings, that’s much different than saying someone pitched six innings, he gave up six runs and he had quality outing. I definitely see the way bullpens are handled nowadays. You got one innings guys and a closer, or it’s geared for a starter to go seven or six.”
With the million dollars teams into getting that strong-armed pitcher who can toss the ball at about 100 miles per hour, teams are not going to risk potentially burning out that young superstar before his time.
“Right now, you have to go with the pitch count for the average pitcher because organizations are conditioning these pitchers go six innings in the minor leagues,” said former Phillies reliever and current radio color commentator Larry Anderson. “Once they hit six innings, they’re tired, they’re not used to going farther. That’s the way they were brought up. Thirty years ago, guys were throwing 300 innings . Now the bench mark is 200 innings.”
This is true in even in the world of video games. If you’re a baseball video game geek, you’re probably playing Sony’s MLB The Show or MLB2K11. I haven’t played 2K11, but I have played MLB The Show and right around the sixth or seventh inning, I notice that the energy meter is on low when they’ve reached 80 or 90 pitches. The pitcher often gives up a lot of hits and runs when they reach the sixth or seventh innings.
But as they say if it’s in the game, it’s in the game.
Like every rule, there are exceptions. If guys like Halladay or Lee are just hot with over a 100 pitches and are still mowing folks down are you going take them out of the game?
“The opposing hitters are going to dictate when to take them out,” Anderson said. “If somebody’s at a 130 pitchers and they’re still dealing and their velocity is still the same, I don’t agree with the fact that you have to take them out because he’s at a high pitch limit. I don’t buy that.”
Anderson said that it all goes back to the work ethic of guys like Halladay, Hamels, and Lee. Speaking of work ethic, Ryan, who is now the president of the Texas Rangers, does not buy into this whole pitch count thing at all.
Echoing what Manuel said about having the right mentality, Ryan has banned the pitch count and is stressing conditioning by implementing a year-round conditioning program for his pitchers. Last year, Ryan told the Dallas Morning News that if a pitcher wants the ball on that fifth day, he better be in shape and have the mentality that he’s going to be able to pitch deep into game.
I believe Ryan might be on to something there because if you ask for something, you just might get it.