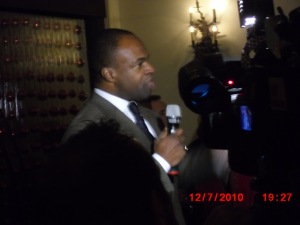 For The Chris Murray Report

With the possibility of a lockout looming in less than 90 days, both the NFL Players Association and NFL owners are in a race against time to come up with a new collective bargaining agreement and to make sure that there will be football in 2011.

On Wednesday, NFL Commissioner Roger Goodell told the Associated Press that he is optimistic that an agreement with the players will be reached by the Super Bowl.

“There’s no higher priority than getting a collective bargaining agreement,” he said following a day of meetings with NFL team owners. “So we will work night and day to get that done.”

But the leadership of the National Football League Players Association along with its members are bracing themselves for the worst.

In what could be described as a well-orchestrated, preemptive public relations campaign, the NFLPA and its leadership has been going from city to city with its “One Team Tour” an effort to let fans, labor leaders and local political leaders know that the players want to play football in 2011 and they’re doing all they can to get a new collective bargaining agreement with the owners. The current CBA expires on March 3, 2011.

Recently, players union executive director DeMaurice Smith briefly spoke to reporters during the “One Team Tour” stop in Philadelphia  last Tuesday (Dec. 7) at the Water Works Restaurant. The One Team Tour has already made stops in Green Bay, Minnesota and Pittsburgh.

If nothing else, the players union is trying to win the public relations war because often times fans who can barely afford to attend games aren’t necessarily sympathetic to the plight of striking millionaires.

“You’re in a city that loves its football team to death,” Smith said. “You’re with fans and groups of people who want to see these guys play every Sunday. It’s important for our fans to understand that our players want to play. Nothing would make us happier than to get the deal done sooner rather than later and I want them to know that’s what we and the players are fighting for.”

During the course of the gathering, local and national leaders from the AFL-CIO spoke up in support of the players and talked about the impact an NFL work stoppage would have on the Philadelphia community as well as the rest of the country.

“It will mean that 25,000 people who work in concession stands in our stadiums will not be able to work,” said Arlene Holt Baker, executive vice president of the AFL-CIO. “It means that in every team’s city we will lose $160 million. Now I ask you in these tough economic times, can any of our cities afford the loss of $160 million? No, they can’t. We come here in solidarity and we will stand with our brothers until victory is won.”

During the last work stoppage in 1987 in which the owners used replacement players, some NFLPA members crossed the picket line and played with the replacement players. Eagles cornerback Ellis Hobbs are far more unified and prepared to dig in for an impending lockout. “What a lot of people are banking on as far as the owners are concerned is that we don’t know what we’re doing., Hobbs commented, “The truth is a lot of us don’t understand, but what we do know is that we have leaders who know what they’re doing and are in the right position …They’re telling us what to do and we’re following and so we’re unified in that sense.”

The NFLPA appears to bracing itself for the long-haul by urging its membership to start saving at least 25 percent of their salaries for what could be an arduous negotiation process that could possibly jeopardize the 2011 season. Smith said he it wasn’t difficult for players to understand the urgency of the situation.

“When I met with the Eagles players during the season just like every other team we talked them about if we don’t have a deal done by a certain amount of time, it is incumbent on players to protect themselves and protect their families. The message from the beginning of training camp until now has been protect yourself from this lockout.”

The owners have apparently built their own lockout war chest with a $900 million work stoppage fund, which means they are also preparing for long and difficult rounds of negotiations with the players union.

One of the main points of contention in the negotiations between the players and the owners is the distribution of revenue. The owners, who shaved two years off the current collective bargaining agreement, saying that some of the league’s franchises are suffering because the players are getting 60 percent of the revenue. Their goal is to get the players to take an 18 percent cut.

But Smith said the players aren’t getting the 60 percent of the gross revenue as the owners claim. He said the actual is number is 50 percent minus $1 billion dollars off the top. It was a point that he made emphatically clear during his confab with reporters.

“Players get 50 percent of all revenue,” Smith said. “The owners want an additional billion dollars off the top that means (the players) taking substantially less than 50 percent. That’s really been at core of our discussions. I’m hopeful that we’ve been able to get information to try to reach a fair deal.”

In 2009, the NFL made close to $9 billion dollars in gross revenue.

Getting that information from the owners is another one of the challenges in the negotiations. Commissioner Roger Goodell and the owners have said they have been struggling with the current downturn in the economy. The players are pushing for the owners to open their books so they can get a better understanding of their situation.

The only team to release their financial records was the Green Bay Packers, which are publicly owned. In 2010, “Our goal is transparency and we’re not there yet,” Smith said. “I think transparency is good for us, it’s good for business partners. I think that a world where the players and the owners have an accurate and true picture of the business of football. That’s the way true business partners deal with each others.”

The possibility of an 18-game schedule is something that doesn’t sit too well with the players, who are concerned about the toll a longer season would take on their health, especially at a time when head injuries are on the rise.

Hobbs, who’s out for the season with a neck injury he suffered on a helmet-to-helmet collision in a game against the New York Giants, said the move to an 18-game season has to take the players health into consideration.

“When you go through an injury like I did and have been through the injuries that I’ve had throughout my career why do want to risk putting on two extra games when it’s already a long enough season,” Hobbs said “Without the right compensation, I really don’t see that happening or something that we can agree with.”

One thought on “With Possible Lockout Looming, the NFLPA Takes its Case to the People”