Now that “Pretty Boy” Floyd Mayweather Jr. has done away with a game, but very old “Sugar” Shane 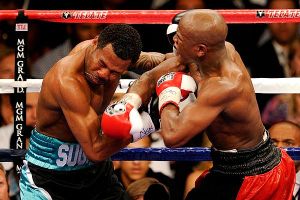 Mosley, it’s time for everybody in boxing to stop fooling around, shucking and jiving and make the Mayweather-Manny Pacquiao fight a reality.

If boxing wants to command the respect and esteem it once held during the days of Ali-Frazier, Leonard-Hearns, Pryor-Arguello, Robinson-LaMotta, Zale-Graziano and a whole host of boxing great rivalries that are too numerous to list here, the promotors of Pacquiao and Mayweather have to make this happen.

With all the talk of mixed martial arts supposedly gaining in popularity over boxing, a big-mega fight in the “sweet science” like a Mayweather-Pacquiao would certainly command the attention of the sports public that would  go beyond just hardcore boxing fans.

The storylines for this one are very easy. Mayweather is your trash-talking, cash-flashing braggart who claims he is greater than Muhammad Ali, Sugar Ray Robinson and the legends in the sport. Meanwhile, Pacquiao (58-3-2, 38 KOs) is that hard-hitting force who has methodically destroyed everyone in front of him He is the classic little man from the Phillipines with fast hands who can hit you from all kinds of angles.

For all of Mayweather’s boasts of his prowess in the ring, he has not faced a fighter of Pacquiao’s caliber. He has not fought a guy strong enough to keep the pressure on him and make him have to gut out a win. Unlike the great fighters of yesteryear, Mayweather Jr. hasn’t had that arch-nemesis capable capable of putting a few marks on his face.

If anything, Mayweather (41-0, 25 KOs) has managed to avoid fighting some of the better fighters in the welterweight division  like Miguel Cotto, Antonio Margarito and Paul Williams, who is now figthing as a junior middleweight.

When negotiations broke down between Mayweather’s camp and Pacquiao’s camp over drug-testing, some of Mayweather’s critics said he was afraid to fight Pacquiao because he might lose to what they feel is a stronger, tougher opponent.

Here’s the deal, folks. If Mr. Mayweather, who has a propensity to flash his cash everywhere, wants to truly cement his greatness as a boxer, he has to get in the ring against Pacquiao. If Mayweather is really among the best of all time he has to beat the guy who is now considered the sport’s best pound-for-pound fighter.

The one thing that boxing fans have been wanting to see from Mayweather throughout his career is how he responds when an opponent wracks him with a hard shot. In his fight against Mosley, Mayweather took a couple of hard rights to the head that staggered him and nearly sent him to the canvas in the second round.

To his credit, Mayweather regained his composure after that second round and pitched a shutout against Mosley for the rest of the fight. In the third round, Mayweather, who is normally a defensive fighter who likes to counterpunch, went on the offensive against Mosley and peppered him with several two-punch combinations en route to an easy unanimous decision.

But you might say that Mayweather should have a dominated Mosley because he is 38-years-old with diminishing skills.  For that matter,  Mayweather probably should have knocked out  Mosley, who didn’t throw many punches to follow up his early success. After that second round, Mosley got old in the ring. His body couldn’t execute the punches the way he did when he was a young relentless fighter who could chase his opponents down and keep the pressure on.

If you’re in Pacquiao’s camp, you gotta be thinking that your man can win this fight because if Pacquiao hits Mayweather the way Mosley rocked him in that second round, there’s not going to be any let up. Pacquiao, in knockout wins over Cotto, Oscar De La Hoya and Rickey Hatton, has shown that he is  a devastating finisher.

And so here it is, boxing, a golden opportunity to recapture the public’s imagination with the sweet science. No excuses, no drug tests, no politics, no promoter tricks. Just do it. To quote former boxing referee Mills Lane: “Let’s Get It On.”